To combat the “media’s” unrealistic body images, BuzzFeed put on “Body Positivity Week” this past May. Capping off the plethora of articles about body shaming, BuzzFeed took photos of four “ordinary” guys (a comedy group, The Try Guys) imitating the poses of well-sculpted celebrities. Unfortunately, one media outlet – BuzzFeed – failed to get the message.

Even within the article itself, BuzzFeed failed to stick to its own principles. First, the article was publicized with a picture of one of The Try Guys, Zach, juxtaposed next to his celebrity counterpart Justin Bieber. Apparently, the article wouldn’t attract enough attention if it just showed ordinary Zach. BuzzFeed should have taken a note from one of The Try Guys who said in the video, “People aren’t just going to remember you because you have six-pack abs. They’re going to remember you because you’re a good person.”

The video treated The Try Guys more like circus freaks, allowing them make their cute moral appeal at the end, than as new body ideals equal to the likes of Channing Tatum and Cristiano Ronaldo. At one point early in the article’s video component, Zach is depicted being comically launched off screen when a much larger man in boxing gear kicks him. Later, a makeup artist slips up and says, “Usually when we do shoots, we get really really beautiful models.” He is cut off by one of The Try Guys who objects to the implication that he isn’t beautiful like the usual models. At another point in the video, a camerawoman jokes about how one of The Try Guy’s photos will definitely need some Photoshopping in the underwear region. BuzzFeed should really hire more open-minded staffers. 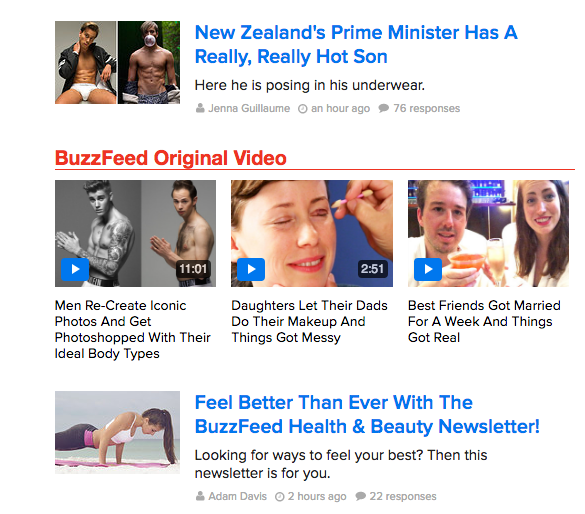 Right beneath The Try Guy’s article, BuzzFeed posted an advertisement for the BuzzFeed Health & Beauty Newsletter. Unfortunately, the staffer who wrote this article didn’t get the message of Body Positivity Week either. The advertisement features two photos of people: a thin, muscular woman doing pushups and a dare-I-say Photoshopped picture of a very thin woman’s lower torso and legs. But this is all excusable because the advertisement promises that it is advertising only “body-positive advice.”