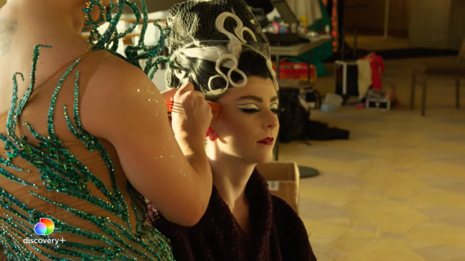 Last week, Discovery+ premiered the six-episode series Generation Drag, an exploitative documentary that follows five tween and teen drag queens as they prepare for Dragutante, a drag show for minors in Denver, Colorado.

All the kids are given a "drag mom," an adult drag queen who "mentors" them. Some of these queens refer to the child they mentor as "my child," giving the whole interaction a cult-like feel.

Many of the kids have been exposed to gender ideology and pride activity early and often. Most feel "different" and have struggled to make friends throughout their lives. All are vulnerable.

There is 12-year-old Vinny who first discovered drag at age 10 when his mom took him to a Denver pride parade. Vinny says he "realized he was gay" when he was seven years old because he always felt more feminine than masculine. He puts on a kind of "sassy gay boy" act which he only lets down when he is describing personal struggles.

"When it comes to my dad there is a lot of pressure," Vinny says at one point. "He grew up being known as a great, cool, popular guy and does everything the best and I guess he wants me to be the best and so it makes me very stressed."

Vinny's dad wants desperately to relate to his son and, with Vinny's mother, throws himself into making sure Vinny creates a superior drag performance. "Game day!" his dad says when Dragutante arrives. All this leaves Vinny feeling even more stressed and overwhelmed.

But Vinny isn't the only visibly vulnerable youth in the show. The oldest among the drag performers profiled is 17-year-old Jameson, who goes by the drag name "Ophelia Peaches." The son of a single mom, he considers himself "genderfluid," feeling female some days and male others. For his drag performance, he writes a heartbreaking song about his father's rejection of him as a child.

Other fathers in the series are present and less pressuring in their children's lives but confused and convinced they must embrace their child's new "gender identity."

The father of Nabela, a 12-year-old drag queen who "came out" as trans in the fourth grade, didn't know the meaning of the word transgender when he first heard it.

"I didn't even know she knew what that meant, so I was like, 'Whoa' because I didn't know what it meant," he said.

Nabela's family is of Mexican heritage and her Catholic grandmother shows no interest in seeing her perform in drag. Much of Nabela's story involves trying to get the sweet old lady to celebrate her granddaughter's drag lifestyle. One wishes the family would leave the poor abuela alone.

But respecting family boundaries is not on the LGBTQUIA agenda. When another male-to-female trans teen named Noah decides he doesn't want any family pictures from when he was a boy on the walls, his parents take down the photos.

Noah's "drag mom" is a tranny named Aurora Sexton. Sexton's talent management brags that his work "always pushes the envelope of morality, decency and taste." You can find Sexton's risqué drag oeuvre on YouTube, but I don't recommend it.

Sexton visits Noah in episode four, 'Just Be a Queen.' During the visit, Noah shows Sexton female panties he has created with a felt uterus shape sewn in. Noah sewed uteruses on his underwear because he is sad that he can never have a womb. Sexton asks Noah to make him uterus panties too.

Noah is dating genderfluid Jameson. In truth, Noah and Jameson are two males dating. A generation ago they would have just been considered homosexual males, but nowadays "gay" is passe.

Lastly, the show profiles Bailey, a girl who says she's a boy and dresses up as a drag female. Really, she is just a girl with short hair who would be a theater kid in an earlier era. Bailey is highly creative and sensitive. She was a tomboy as a younger child. She has no friends and finds social interaction difficult. Bailey shows some signs of being a female on the autism spectrum, but her parents never appear to have explored such a possibility. The "gender spectrum" is the answer they have embraced instead.

The whole series is heartbreaking. It's sad to watch sensitive, struggling or damaged youth be groomed as they fall further down the rainbow rabbit hole. Generation Drag is just the latest manifestation of the sort of child indoctrination Hollywood encourages and promotes.