Child Grooming! Law and Order: SVU Has 8-Year-Old Come Out as 'Bi' 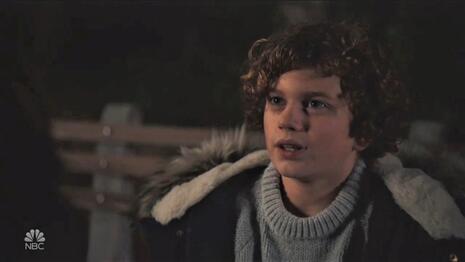 For a show based on the concept of protecting victims from sexual predation, you would think NBC's Law and Order: SVU would not encourage the early sexualization of children. But in the contemporary wave of Gay Inc., madness and child grooming is just "LGBTQUIA+ affirming."

The show opened with Benson witnessing Noah being bullied by another boy. At the end of the episode, Olivia and Noah are talking about the incident when he reveals why the bully targeted him.

Olivia: So Annie's mom called and wanted to have another playdate, and I said that it would be better if she came to our house.

Noah: You didn't tell her it was about Hudson and the dog cage.

Olivia: Actually, I did.

Noah: Mom, I asked you not to.

Noah: Hudson's just an idiot. No one likes him anyway. He bullies everyone. It was just my turn to be his target.

Noah: I don't know. First, he went after Corey 'cause Corey told everyone their pronouns are they/them, and Hudson started calling Corey a fairy. So then I said that I was bi and that there's no shame in being true to yourself.

Olivia: That's right, Noah. So you stood up for Corey... And stood up for yourself. And that is incredibly brave.

Noah: Well, it's my truth. I just hadn't told anybody before.

Olivia: Well, thank you for telling me.

Noah: No big deal. It's not like I have a boyfriend or girlfriend. It's just not fair for anybody to be left out.

Olivia: I'm really proud of you.

Once again, Noah is prepubescent and as yet has little sense of what having a "boyfriend or girlfriend" means in a deeper romantic and sexual sense. The words being used by the boy in that scene don't even sound like the dialogue of an early elementary school student. It's ideological brainwashing spewing out of a vulnerable child.

The series continued the cringe "deep thoughts" from a kid on Buggle's Instagram page where he posted propaganda clearly formulated by adults.

"Filming this episode was such an important, incredible and exciting experience for me. @therealmariskahargitay personally called me to talk about the script before it was finished and I felt so involved and respected. It is incredible to see Noah beginning to discover who he is. My feelings are the same, there is no shame in being true to yourself and no one deserves to be left out or bullied because of it. I wanted to take the time to connect you with an incredible organization that I've learned about that is creating safe and inclusive K-12 environments for all students. @GLSEN thank you for all you do."

The organization Buggle mentions in his post, GLSEN, promotes putting "LGBTQUIA+ affirming" books for kids as young as kindergarteners into public schools. It was founded by teachers. This is not surprising, since left-wing teachers have been at the forefront of usurping parents' rights and pushing early sexual identitarianism on children.

The comments to the MSN article were overwhelmingly negative about the episode.

Comments included, "He's 8!! What does he know about it? Stop with all of this woke nonsense. The writers should be ashamed of themselves" and "I don't think an 8 year old knows exactly what he or she is at that stage."

Hmmm....maybe audiences didn't love this disturbing and ridiculous episode the way corporate media insists they did.

This rant was brought to viewers in part by T-Mobile, Liberty Mutual and Lancôme. You can fight back by letting these advertisers know what you think of them sponsoring such content.