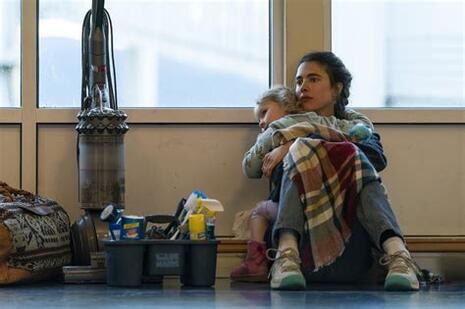 Maid, inspired by Stephanie Land's memoir, Maid: Hard Work, Low Pay, and a Mother’s Will To Survive, premiered on Friday, October 1. It is the story of a poor single mom, Alex (Margaret Qualley), who struggles to hang on after leaving an abusive relationship. In the second episode, "Ponies," Alex recalls the day she told her boyfriend Sean (Nick Robinson) that she was pregnant.

Alex: The armchair in the front lawn of our trailer belongs to me. And you can't tell under all the mold, but it's pink velvet. And when I moved into Sean's, it came with me. And when I told him I was pregnant he sat me down on that chair and he brought me a cup of mint tea and he told me he would hold my hand every step of the way. All tenderness. But then when I told him that I wasn't gonna get an abortion he took the chair and all the rest of my belongings and he threw them out into the rain. And he screamed at me and he told me that I was a fucking whore. And he said that I was ruining his bike trip and that I was also ruining his life. And he said that, uh, he would never forgive me. And he hasn't.

Alex: And I've been afraid of him everyday since. Anyway, just something I'm working on right now.

While much of the series is a fictionalization, Stephanie Land has said her boyfriend tried to intimidate her to abort when he learned of her pregnancy. Pressure against vulnerable pregnant women to abort from boyfriends, parents or others is a common experience. Even the left-wing outlet the Daily Beast has admitted the prevalence of coerced abortion in the United States.

But in an era of "shout your abortion" insanity, acknowledging that abortion is not the "women's liberation" radical left-wing feminists like to claim is rare to see in a series.

By the end of the series, Alex is on more stable footing. She has permanently ended her relationship with her abuser and received full custody of her daughter, Maddy (Rylea Nevaeh Whittet). As Alex tells one of her wealthy clients, "I live for my daughter."

She moves to Montana with her toddler to attend college and build a future as a writer. The series ends with her and her little girl on top of a mountain smiling and laughing. The audience cannot help but feel joy that Alex rejected abortion and gave her unborn child the chance to live.