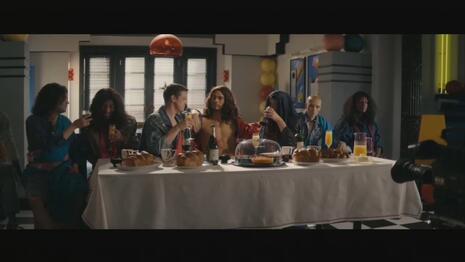 Showtime’s Black Monday turned the Last Supper into a homoerotic scene with “Jesus” making out with one of his apostles and Mary Magdalene.

In this week’s episode, ‘Six!’ on Sunday, June 20, Tiffany Pfaff (Casey Wilson), who runs a clothing company marketed to Christian women, discovers that her clothes are also popular with gay men.

She and the company’s financial advisor, Keith (Paul Scheer), therefore decide to create a homoerotic scene from the Bible to both market the Pfaffashions line and honor someone killed at the funeral of an evangelical Christian pastor. "I don't know how to make this script work for hard-core religious zealots and hard-core party boys," Tiffany says.

Keith and Tiffany create a make-out scene between Jesus, his apostle Peter and Mary Magdalene, using scriptural references for the dialogue.

“You don't think we kind of strayed too far from the source material, do you? ” Keith asks at rehearsal.

Tiffany and Keith watch the finished product with Corkie (June Diane Raphael), the daughter of the evangelical pastor.

Announcer echoing: Just as Jesus forgave, we ask you to forgive.

Corkie: I didn't know you were gonna be in it.

Jesus: May the Lord be with you.

The sort of blasphemy in this scene is par for the course for Black Monday. Previous episodes of the show have had Tiff throw a drink at a crucifix and yell, “Fuck you God!” and portrayed Christians as degenerate hypocrites.

The show somehow keeps getting renewed despite a sharp decline in ratings from the first to second season. Hopefully, this third season will be its last. Regularly mocking Christianity, conservatives and other left-wing Hollywood targets gets predictable and tiresome week after week.