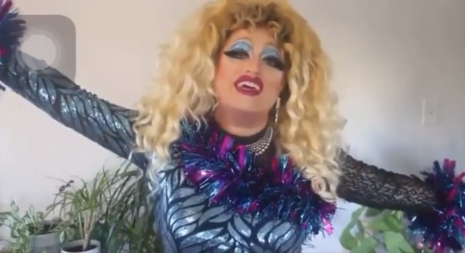 Drag queens continue to groom preschoolers with the help of entertainment media and woke "educators."

This spring, a PBS Station in New York aired a drag queen storytime and sing-along with "Little Miss Hot Mess" on a program for children aged 3-8.

Lil Miss Hot Mess read her "children's book" The Hips On the Drag Queen Go Swish Swish Swish on the preschool program Let's Learn, for WNET, a New York PBS affiliate. Let's Learn is a partnership of WNET and the New York City Department of Education.

According to the Daily Caller, The Hips On the Drag Queen Go Swish Swish Swish "features the drag characters 'Frida Bea Me, 'Jaclyn Jill,' 'Stinkerbelle,' 'Rita Booke,' 'Mother Lucy Goosey,' 'Cinderfella,' 'Pina-Buttah-Gelee,' 'Rosie Ringarounda,' and 'Ella Menopipi,' and 'follows a drag queen who performs her routine in front of an awestruck audience.'”

What parent wouldn't want their children to learn from a sexualized performer who creates a children's book with names like "Buttah-Gelee" (wink-wink), "Cinderfella" and "Menopipi"?

Lil Miss Hot Mess danced and sang "The Hips on the Drag Queen Go Swish Swish Swish" to the tune of "The Wheel on the Bus." Then Ms. Mess told the virtual audience of little ones, “I think we might have some drag queens in training on our hands.”

Lindsey Horvitz of WNET told Fox News on Thursday: "The program strives to incorporate themes that explore diversity and promote inclusivity, which are relevant to education and society. Drag is a performance art that can inspire creative thinking and the questioning of stereotypes. Lil Miss Hot Mess is the author of the book, The Hips on the Drag Queen Go Swish, Swish, Swish. She serves on the global leadership team of Drag Queen Story Hour and has hosted readings at numerous libraries, children’s museums and schools across the country."

While WNET is defending the program, PBS appears to be distancing itself from this "hot mess." It told Fox that Let's Learn was "not funded or distributed by PBS."

It is actually surprising that PBS is distancing itself from this latest LGBTQ push into children's lives. After all, PBS has been pushing Gay, Inc.'s agenda for years. Apparently, some leftists have limits and "Buttah-Gelee" may be a public relations bridge too far even for those who usually wink at child grooming.