Freshly emboldened by the NCAA’s withdrawal of all championship games from North Carolina over that state’s HB2 law, which requires that people use the bathroom of their gender as assigned at birth, the Rainbow Jihad, represented by Outsports, has now trained their sights on getting schools they don’t like kicked out of the NCAA entirely: 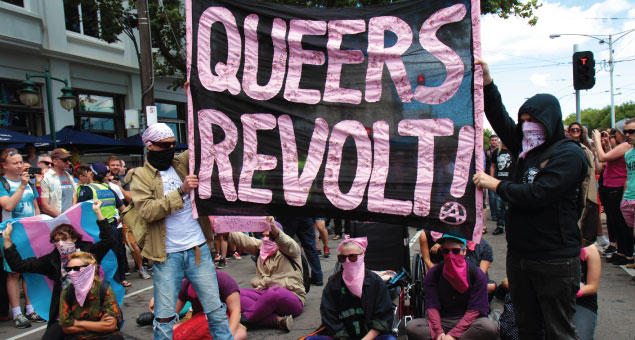 “The NCAA made a great public relations move when it announced this week that it would remove all championship events from North Carolina, in response to the state’s anti-LGBT “HB2” law. Praise came from fans, media members and even athletic departments of schools within North Carolina.

In the NCAA’s own words, “NCAA championships and events must promote an inclusive atmosphere for all college athletes, coaches, administrators and fans.”

The association’s claim to protect “all” so far hasn’t extended to student-athletes at BYU and other Christian schools that isolate and target gay people with policies and practices.

If the NCAA is serious, it is only a matter of time before BYU gets kicked out of the association. And every other school with an anti-LGBT policy will be removed as well.

If they are not removed in a timely fashion, this move by the NCAA out of North Carolina was truly just a public relations maneuver that I’m afraid too many people fell for.

It’s remarkable that schools like BYU haven’t been kicked out of the NCAA already, given the association’s claims of dedication to equality. BYU’s policies are far more sinister and discriminatory than North Carolina’s HB2 law. While the law bars discrimination protection and forces trans people to use the bathrooms of their birth sex, BYU’s policy outright discriminates against the entire LGBT community at every level and bans homosexuality all together.

Married same-sex couples cannot live together at BYU. Their children are considered bastards by the school. Gay students are afraid to show simple affection on campus. This is not hyperbole.

“We believe in providing a safe and respectful environment at our events and are committed to providing the best experience possible for college athletes, fans and everyone taking part in our championships,” NCAA president Mark Emmert said in a statement.

He has to be joking. Emmert cannot possibly have his head so deep in the sand that he has not heard of the struggles, loneliness and outright discrimination at BYU and other “Christian” schools.

It’s nothing new. BYU has maintained these anti-LGBT policies for decades, openly discriminating against gay, lesbian and bisexual student-athletes in the name of God, Jesus, religion and the Mormon Church. If the NCAA is serious about maintaining its commitment to “fairness and inclusion,” it cannot do so while BYU is a member of the NCAA. Frankly, that they have allowed BYU to remain speaks to the lack of true commitment to equality on behalf of the NCAA.

It’s not just BYU. There are dozens, if not hundreds, of NCAA member institutions with policies that specifically target LGBT people. LeTourneau University in Texas makes it against the rules ― punishable by expulsion ― for two people of the same sex to hold hands. Erskine College has tried to ban gay student-athletes. Azusa Pacific University in Division 2 created a hostile environment for a newly out transgender professor, asking him to leave the school (which he reluctantly did). Pepperdine Univ. refuses to recognize an LGBT student group on campus. While we focus so much of our energies on “the South” and “rural” schools, those last two are in the Los Angeles area.

What do they all have in common? They are members in good standing of the NCAA.”

Of course, most of the listed schools also have Christianity in common. Which makes Outsports feel icky. There’s a simple solution for all the supposedly endangered LGBT students who go to universities that have codes of morality and conduct that conflict with their chosen lifestyle: don’t go to those schools.