It appears as though GQ Magazine has finally found a form of sports arena protest that they’re opposed to.

On Sunday, multiple NFL players protested the National Anthem and the flag all across the league. Yet, after listing those various protests, GQ chose to direct its ire at a vocal group of fans voicing their protest to President Obama’s video tribute. Which, was played just before the games:

“…So I'd imagine that when a video showing President Obama talking about 9/11 played at NFL stadiums, people were respectful of him, right? I mean, it's not like anyone could find fault with this:

"It's Sunday, and here in America that means it's time for football. But on this day 15 years ago, the world was shaken. Towers crumbled. Thousands of our fellow Americans lost their lives. Our nation and the whole world mourned as one. Yet, as we saw in the days and weeks that followed, and what has become even clearer in the years since, is that the legacy of September 11 is not one of terror and fear but of resilience and hope. Because 9/11 didn't change us as a nation. Instead it revealed who we are and who we have the capacity to be. The bravery of our first responders. The example of those who lost loved ones. The service of a new generation of heroes who signed up to wear our uniform. That's who we are. That's who we've always been. A big- hearted people full of courage and optimism. And on this 15th anniversary of a very dark day, that's the light that America continues to shine for the whole world to follow. God bless this country we love. Enjoy the games."

Nothing boo-worthy there, but that didn't stop people. 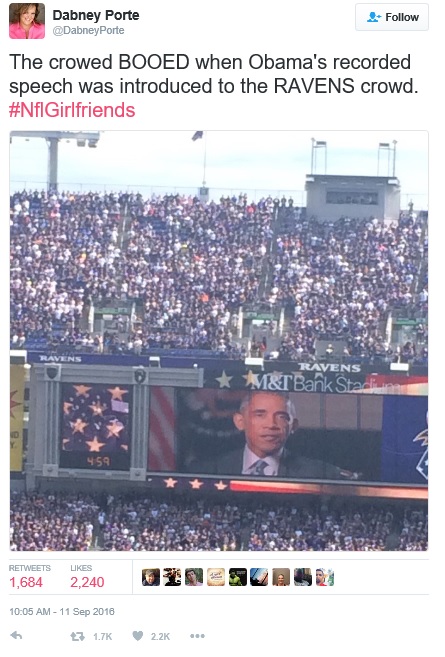 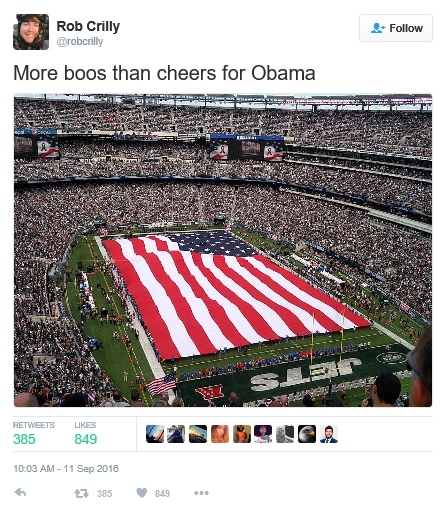 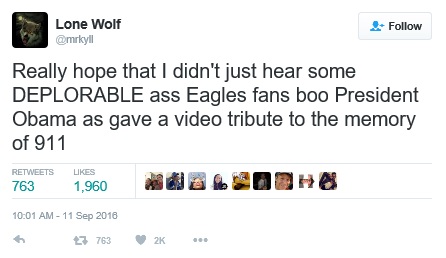 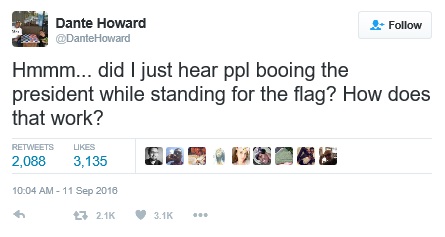 Now, clearly not everybody booed, but those who did really make you think. I'm speculating here, but I feel it's a pretty safe assumption that a bunch of people who almost certainly talk about how Colin Kaepernick and company are disrespectful to our country decided to boo the president's 9/11 address. Don't get me wrong. If they want to boo the president, that's their right. But to do so and also chastise players for kneeling during the anthem is such mind-boggling hypocrisy it makes my head hurt.”

The writer’s head probably hurts more from making an awful analogy, than it does anything else. Fans booing the President is not mind-boggling hypocrisy, it’s merely the other side of the free speech coin that liberals never want to admit exists. The side that disagrees with them. Moreover, the fans weren’t protesting Obama’s speech. They probably weren’t even listening to his speech. They protested and booed him as the President, who, unlike the flag and the Anthem, is not a symbol of national unity and apolitical Americana.

In fact, it could be said that a President (clears throat, especially this President) is the very definition and symbol of partisanship.

At least that’s what people tell me.