The title Dumb & Dumber would fit as the title to any movie made about the NFL’s handling of player protests, and attempts at support around the Fifteenth Anniversary of 9/11.

According to CNN, the NFL threatened to penalize a player for wearing patriotic cleats on 9/11: 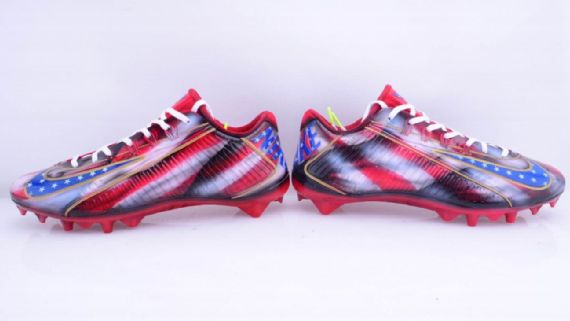 “The NFL will remember 9/11 with tributes this Sunday, but one player's patriotic gesture has earned a penalty flag from the league.

Tennessee Titans linebacker Avery Williamson earlier in the week said he would wear specially-designed patriotic cleats when he lines up against the Minnesota Vikings on Sunday.

The special red, white and blue cleats include stars, an American flag-inspired Nike logo and the words "Never Forget" printed on the heel, according to photographs posted on Williamson's verified Twitter account.

But that would violate NFL rules, which stipulate each player's shoes must be either black or white, with team colors serving as allowable dominant or secondary colors on the shoes.

The NFL rule book says unapproved shoes are allowable only if "the player tapes over the entire shoe to conform to his team's selected dominant base color."

Fearing a fine from the league, and leery of becoming a distraction, Williamson said he decided to auction the cleats for charity.

"I want to wear them. Would love to represent and show respect to my country in them, but I also respect my affiliation," Williamson said in an email to CNN.”

So, if keeping track at home, the NFL has done absolutely nothing about multiple players sitting and kneeling during the National Anthem. Nor, did the league do anything about one of those same players wearing socks that depicted cops as pigs. In addition, to not allowing the Dallas Cowboys to wear a decal merely expressing solidarity with the Dallas Police Department.

And just when you thought they couldn’t get any dumber…they stop a player from wearing patriotic cleats on 9/11.

Your NFL at work.