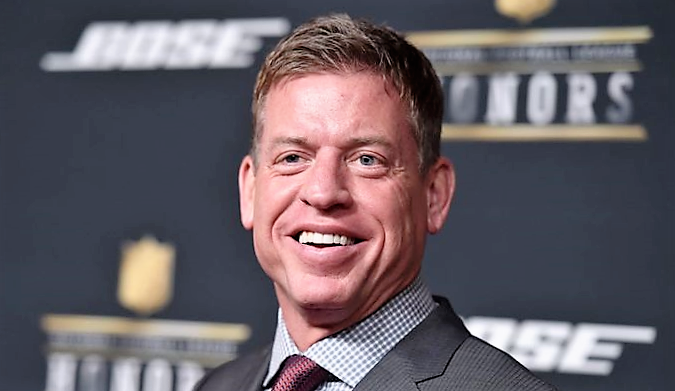 NFL Hall of Famer and former Dallas Cowboy Troy Aikman took to Twitter on Friday to express support for the Police, in the aftermath of the Dallas shootings.

And because of that tweet, Aikman, found himself in the crosshairs of the Huffington Post. In an article titled, “Why Troy Aikman’s ‘Back The Blue’ Tweet Is So Tone-Deaf After This Horrible Week,” Juliet Spies-Gans explained Aikman’s “tone deafness”:

“Troy Aikman expressed his solidarity with police departments around the nation Friday morning, tweeting out a Fox News graphic with what some users thought was an insensitive and telling disregard of Alton Sterling and Philando Castile’s deaths earlier this week.

“Sadly most police departments around the country don’t feel much support these days,” the Dallas Cowboys legend wrote, pairing the tweet with a “#backtheblue” hashtag. 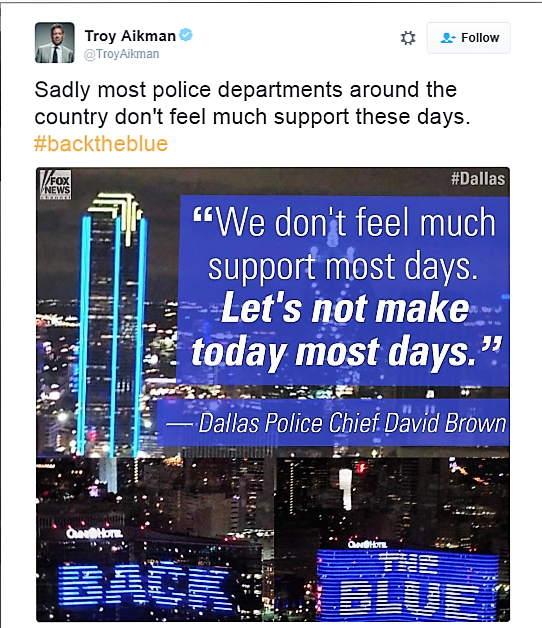 Aikman’s words came the morning after snipers ambushed and killed five police officers at a peaceful Black Lives Matter rally in Dallas, Texas ― a rally that, in turn, was in response to the extrajudicial killing of Sterling and Castile at the hands of the police on Tuesday and Wednesday.”

You have to love the use of the word “extrajudicial” here. According to the Oxford Dictionary, extrajudicial is defined as:

not legally authorized, or, not made in court; out-of-court

Merriam-Webster refers to extrajudicial as:

not forming a valid part of regular legal proceedings; delivered without legal authority; done in contravention of due process of law

Whether or not the shooting deaths of Alton Sterling and Philando Castile were illegal, or not legally authorized, or in contravention of due process of law, or delivered without legal authority, remains a matter for courts to decide. Not the Huffington Post.

But hey, who cares about truth or due process of law? When your sole aim is creating the perception that the police are just a bunch of roving thugs, making the law up as they go.

Next, Spies-Gans detailed some of the angry responses Aikman received to his tweet: 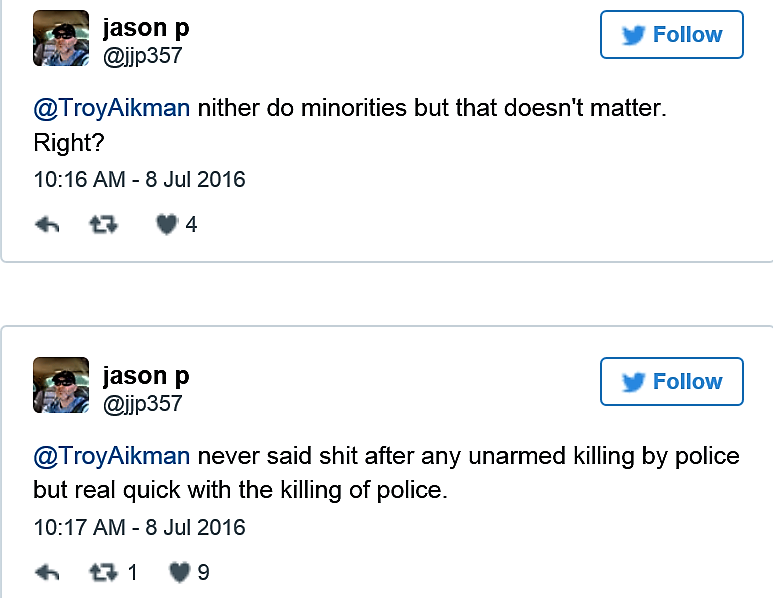 After which she took off her legal hat (which she wore so poorly), and attempted to replace it with a psychiatrist’s hat, by trying to explain what the tweeters did and did not mean to say. Before calling the police racists:

“To be clear, it’s not that these users unequivocally take issue with any show of support for police officers. Rather, what they saw as problematic here was (1) Aikman’s radio silence on the deaths of the two black men days earlier, and, relatedly, (2) his categorical, unqualified support for the police during a week in which we got two cruel reminders that racial prejudice still runs rampant throughout the force, consciously or otherwise influencing the choices some cops make while on the clock.”

What exactly was Aikman supposed to say when he first heard the news about Castile and Sterling? Was he supposed to automatically condemn the police without any knowledge of the particulars of the situation?

No, that’s the Huffington Post’s job.

How many new things did we find out about Michael Brown and Freddie Gray incidents, months after they occurred? After all, I’m old enough to remember when Michael Brown was 160 pounds soaking wet and George Zimmerman was 100% white.

No, Aikman couldn’t have responsibly dove into the sharknado of crazy that ensued after the deaths. Because, as a rational, thinking person, Aikman couldn’t in any way known enough details to make an educated statement on the situation.

Also, as a rational, thinking person, Aikman could remain safe in the knowledge that if officers engaged in anything criminal when they killed Sterling and Castile, there’s a system in place that punishes them for it. As it did in the case of the white Charleston police officer who illegally killed a black man named Walter Scott.

A case the MSM seems to be trying really hard to pretend never happened.

However, yes, in the perspective of all upright walking humans with a shred of intellectual discernment and moral judgment, it is quite possible to look at the sniping/ambush of a dozen police officers, especially those who were in no way connected with those incidents, nor infringing on anyone’s rights, as being wrong.

Nor, is the lawful prosecution of one’s duties as a police officer a sign of “racial prejudice that runs rampant throughout the force.” Someone called 911 on Alton Sterling because he had shown his gun to them and threatened them. He had been in an altercation with police in 2009, in which his gun fell out of his waistband. He was a well-known multiple felon who had committed numerous acts of violence against his community and his family.

There were plenty of reasons for the police to be extremely cautious with him. Not to mention the fact that he continued to struggle after the cops realized he had a gun and warned him to stop.

So yeah, when deciding who to “blindly support,” or give benefit of the doubt to, it’s not going to be the registered sex offender who impregnated a 14 year old.

It’s going to be the other guy. Unless you work for the Huffington Post, apparently.