‘Nipflix’ Takes the ‘Easy’ Route Opting for Skin Over Storytelling 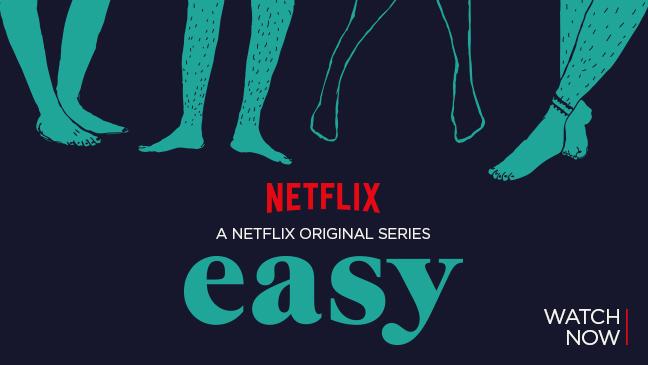 There are a couple ways to create a new hit show: great dialogue (House), groundbreaking concept (Lost), or you can just show lots of boobs. Apparently Netflix, or Nipflix as they could be called, opted for the latter option with their latest original series about sex and relationships, Easy.

The series follows a slew of seemingly unrelated characters living their lives in Chicago, but as the episodes trudge along you see more and more crossover. For instance, the babysitter for the sexless couple from episode one becomes the featured lesbian later on.

The lesbian episode “Vegan Cinderella” features Jaqueline Toboni (who plays Truble on Grimm) as a stereotypical hairy-armpitted, pro-choice activist. Ironically she convinces her new lover to try veganism by having her watch gruesome videos of pigs being butchered. But no doubt she would deem pro-lifers showing graphic footage of babies being butchered manipulation, at best.

Annie: Two were bar dates, a drink. And two were coffee dates.

Lucy: And how did they go?

Annie: The two bar dates... then I slept with them. That's the difference between a coffee and a vodka.

So all you hipsters out there meeting your date at Starbucks are apparently missing out on a lot of action. Quite sad that a show would simply gloss over the fact that alcohol is a key element in a lot of sexual activity that wouldn't happen otherwise. Rather than pointing out that Annie allows herself to be used sexually because of a drug, it becomes a punch line in a show that celebrates adultery, lesbians, and threesomes. Bottom line: if you feel a desperate need to watch a Netflix original, your best bet is Stranger Things.