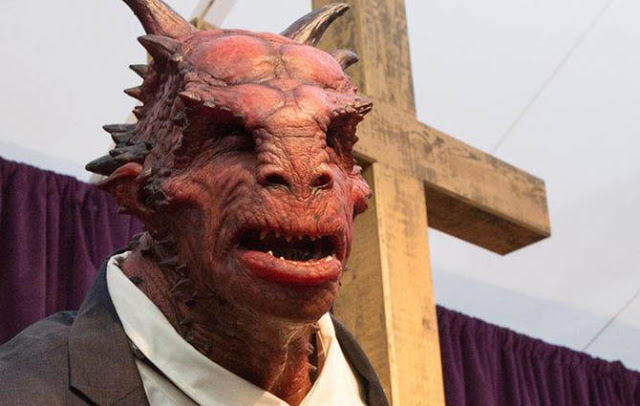 It's a pretty common characterization that traveling preachers are nothing but snake oil salesman preying on those of lesser intelligence or, at the very least, those who are hurting. And certainly there have been many instances where those characterizations are true. Religion is a powerful tool and can be wielded by those with good or evil intentions. That being said, the fact that Hollywood feels the need to throw this stereotype out there on a regular basis is quite tiresome. Which brings us to this week's episode of NBC’s Grimm.

For those unfamiliar with Grimm, it is a show about all sorts of creatures (called Wesen) who look human to the average person but have the ability to transform and reveal their true identities should the need arise. Often these transformations occur during a gruesome murder so the victim never gets to tell the tale. Unless of course you are of the Grimm bloodline (as in the Brothers Grimm) in which case you can see these monsters for who they are. The Grimms have hunted down and killed Wesen for centuries, but in our show, Detective Nick Burkhardt (a Grimm) is friends with several Wesen and together they take down only the evil ones. Yes, it is a bit hokey, but overall it is an entertaining show.

In this week's episode “The Believer,” the primary Wesen is a traveling preacher named Dwight Eleazer, who reveals his creature side during his sermon about sin. He claims he can sense evil in the room and commands the devil to reveal himself. He then transforms into a red devilish creature before their eyes and struggles on stage as though possessed before commanding the devil to be gone, at which point he turns back into himself. Obviously such a display is very convincing to the crowds. Pass the offering plate and let's move on to the next town. Thus perpetuating the myth that Christianity, and in particular traveling ministries, is just in it for the money. Nick's Wesen friend, Monroe, even claims that the Vatican used to keep several of these devil Wesen in the basement and parade them around occasionally to increase tithing.

To be fair, though, NBC doesn't leave the viewer with the impression that the preacher is all bad. Even though he is using deception to get converts, his primary motivation appears to be more wanting to see people change their lives than it is to become wealthy. Many who work for him have left behind their criminal pasts to become model citizens. So do the ends justify the means? If the preacher is a true believer and simply uses his “gifts” to help others see the light perhaps that’s better than letting people continue to live in sin. Pretty sure Jesus would not condone such tactics, but it also seems unlikely that Jesus writes for NBC so we will have to make those moral decisions based on scripture instead of scripts.