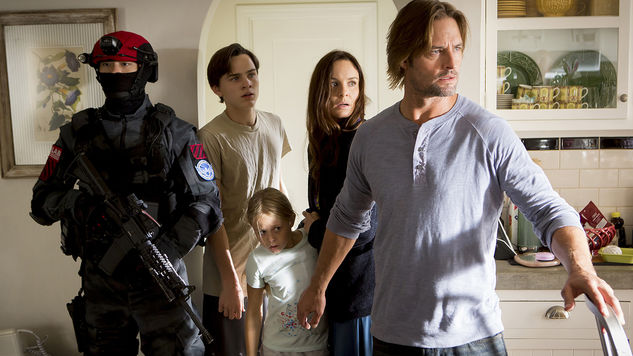 If you haven't had a chance to watch the premiere season of USA’s Colony then you have missed some really well done television. The good news is you have plenty of time to binge all ten episodes, as it is not slated to begin season two until 2017.

The premise of the show is that aliens have already conquered Earth and have put up giant walls to segregate regions. Those who survived the initial attack are now subject to martial law, complete with curfews and rationing of food and medicine. The alien “hosts” have selected regional proxies from the ranks of humanity. In the case of Los Angeles, Proxy Snyder (Peter Jacobson) was an Ivy League college president. Now he is just a power hungry little man doing whatever the hosts tell him to do.

The show's two main characters Will and Katie Bowman (Josh Holloway and Sarah Wayne Callies) are a married couple who each take different paths in hopes of surviving the new world. Will is recruited by Proxy Snyder to head a task force to defeat an insurgency that threatens the stability of their region. Unbeknownst to Will, Katie is involved with the insurgency. This of course leads to many tense moments and a lot of great television. Here is a little sneak peak.

Katie: Those assholes were close enough to picture of my son, and we still don't have him home.

Will: How long you been spying on me, lying to me, selling me out to those killers you work for?

Katie: I did it to protect you.

Will: Bullshit! You did it for you.

Katie: You could fight with us. We could fight together that our kids don't grow up in this.

The takeaway from the show is how eerily similar an alien occupation is to your standard dictatorship/fascism. One need not imagine North Koreans held captive by walls and fences, fully reliant on the regional authorities to provide for their needs. And often those authorities cannot provide enough supplies because, without capitalism to fuel an economy, there is not enough for everyone. Only those who will do the bidding of the authorities are taken care of. The rest have to fend for themselves. You either join the military or be brutalized by it.

For those who favor Democratic Socialism this election cycle, keep in mind that martial law is only a crisis away. Free college and free healthcare all sound wonderful. But what happens when the world economy collapses and the government is in charge of everything you need to survive? When resources become scarce political ties become lifelines, and political discourse makes you an enemy of the state. Buuuut that probably won't happen so here is a little clip from Colony to keep your mind off of such things.

Maddie: My name is Maddie Kenner. I work directly for Nolan Burgess.

Border Bureaucrat: Mr. Burgess, I have a Maddie Kenner in line with two minors, and...

Border Bureaucrat: If you want in, it's now or never. Go! Next! You don't have a pass, you're not getting in! Let me see your pass! You are not on this list!

Don't think something like that could happen here? Why not? People are people. All it takes is the wrong set of circumstances and the wrong leadership. Keep that in mind as you vote this year.