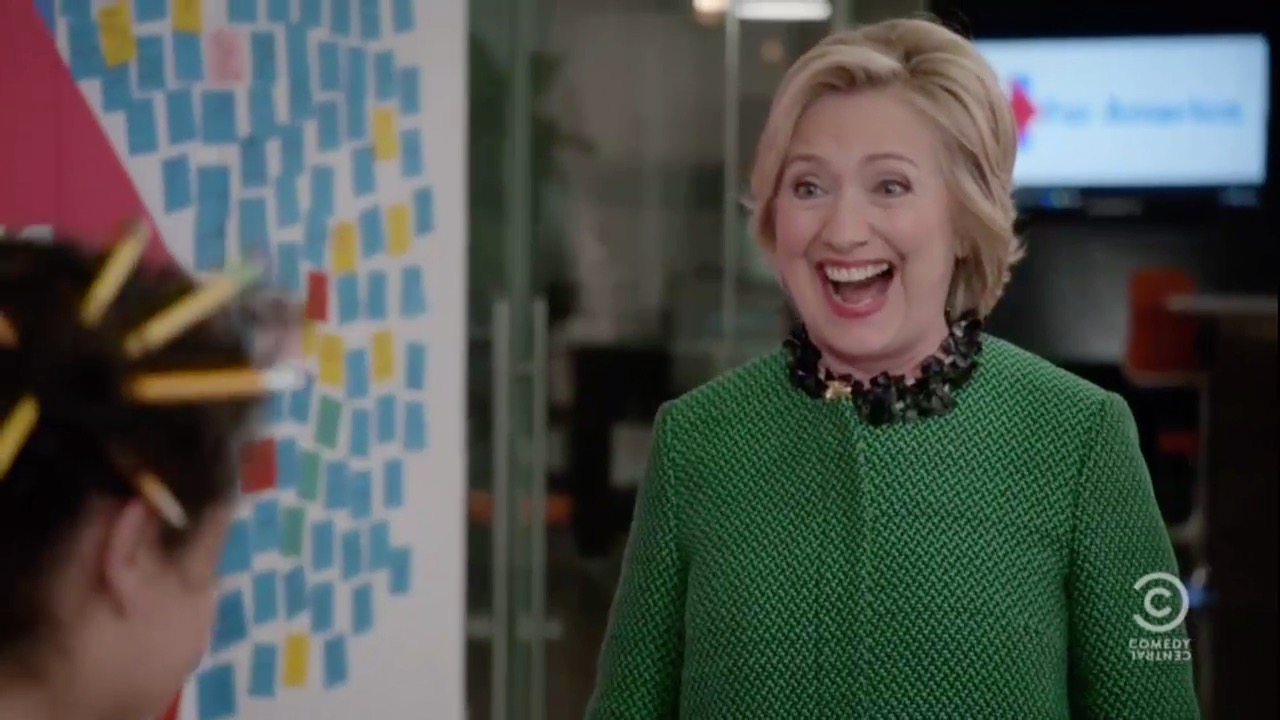 It is no secret that Hillary Clinton has struggled to get millennial women to support her latest campaign, often losing that key demographic to an old white guy. But why? Maybe these young women don't appreciate her hypocrisy in claiming that all women should be believed when they say they were raped when in fact she led the charge against multiple women who claimed Bill Clinton did exactly that. With that in mind, many would rather vote for a guy offering free college than for the symbolic first woman president in a pantsuit.

So Hillary needs to find ways to reconnect with young women and apparently showing up in the Broad City episode titled “2016,” which featured the ineptitude of the DMV, was the best her campaign could come up with. It was actually rather ironic. The DMV is the quintessential example of government bureaucracy gone awry. Even in the episode it is depicted as basically a zombie apocalypse. Why Hillary, a big government progressive, would want that to be to pointed out seems counter-intuitive. Perhaps just sharing a common enemy (be it Republicans, the NRA or the DMV) was meant to create a sense of commonality. She is, after all, just one of the common folk.

The show tries to make the case for Hillary to millennials, by highlighting her support for minorities and her “service.” Ilana volunteers for Hillary for the day (she thought it was a paying gig) and is so excited and impressed, she practically orgasms upon hearing that Hillary has won a Grammy.

Barb: Over the next few weeks, we are gonna push hard toward the primary. We are gonna call every registered Democratic voter, we are gonna confirm the location of their polling place. Every vote counts.

Barb: Thank you. But just remind them succinctly that a vote for Hillary is a vote for the working class.

Ilana: And minorities. You know, your caramels, your queers, your Ls, your Gs, your Bs, your Ts, your Qs. Vets, right? Babies. The-- The handi-capable.

Barb: I love your enthusiasm, but how about the next time you have the impulse to say "Yas," you could just nod. So back to cold-calling. It's really important to remind people of Hillary's service. Not only was she Secretary of State. She was a practicing lawyer. She expanded health insurance for lower income families. And she's won a Grammy.

Ilana: Oh... (Gasping deeply) I did not know that.

Ilana: Sorry, we are just so excited.

Ilana: One more. (Both squealing)

Hillary: Thank-- Thank you, Ilana, thank you for all of your help.

Ilana: You know of me?

Hillary: Well, you're wearing a nametag.

Ilana: Secretary Clinton. Madam... Présidente. She-king. I can't afford to volunteer here full-time, but I still want to get the word out, so I vow to tweet once a week, "Vote for Hillary. Yas, yas, yas."

Hillary: That would be great. We need to drum up some excitement for the campaign, do everything that we possibly can. You know what I'll do? Yes. Look at that! I thought this would be really good for office morale! Isn't she great?

Ilana: Of course. We assumed it was a he.

Abbi and Ilana: It's definitely a she. Oh, God. Yeah. This feels... Just right. Right.

The fact that Hillary would think the wavy arm guy (sorry... girl), would be a morale booster like Ilana is actually quite amusing. Many of her big government policies are eerily similar in their blatant pandering and utter stupidity.

But what is really sad is how low some politicians will stoop in order to scrape a few votes off of a disgusting city sidewalk. Apparently Hillary found two more votes in Broad City.