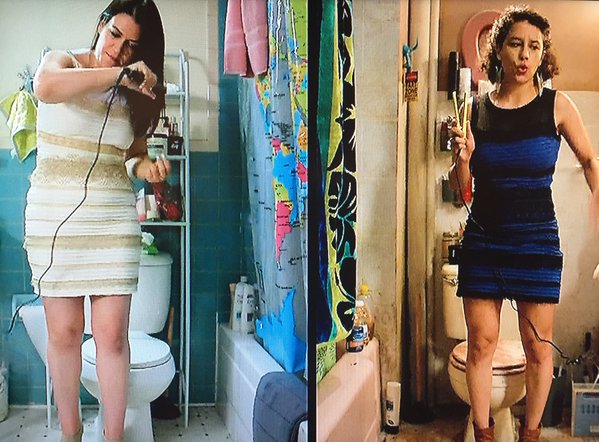 It's pretty safe to say the best scene of “Two Chainz,” the season three premiere of Broad City, was where Ben Affleck looked really serious. No wait, that was a Batman v Superman commercial.  I guess if you are Comedy Central and your biggest hit is a cartoon where rape is funny because it is being done to a Republican (South Park), your standards are obviously not very high.

The opening credits are a side by side montage of Abbi and Ilana, the two lead characters, in their bathrooms either having sex, doing drugs, going to the bathroom, or kissing their apparently negative pregnancy tests. Yes, it is classy from the get-go. But the fun doesn't stop there!

Later, the girls are stuck in the city with nowhere to go to the bathroom so Ilana squats between two parked cars. As she begins pulling her shorts down a police officer approaches. After he leaves Ilana remarks:

Well, that does actually make a decent point; if you are in the process of committing a crime, cops are scary. Maybe it isn't all about race after all...

Then, of course, we have the girls approaching a construction zone complete with signs of “Women's Oppression!” At least that is what Ilana calls the “Men at Work” sign.

And finally the girls attend an art show of a college friend. One of the pieces of ummmm... art (?) is a G. I. Joe action figure drinking from a large pink penis cup. No disrespect to our men and women in uniform, I'm sure. The other prominent display is a 3-foot set of brass testicles. Need a pretty big Chevy to hang those from.

If you want crude then Broad City is your neighborhood. If you want funny, ironically Comedy Central is probably the last place to look.