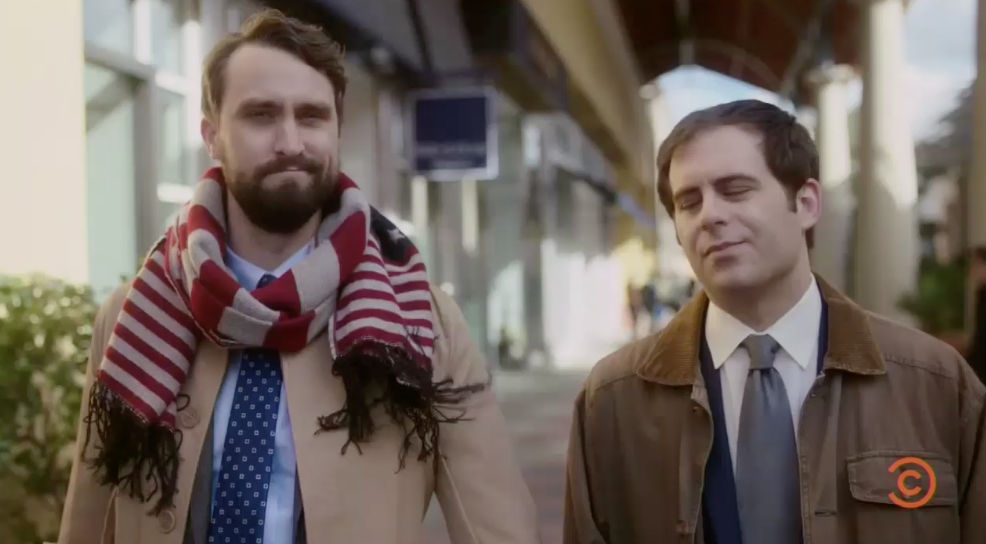 The writers of Comedy Central’s anti-business Corporate are exploiting the tragedy of 9/11 to get a rise out of conservative viewers. Star Jake Weisman told The Daily Beast, “Honestly, I want Fox News to see it and I want them to get really mad,” regarding their season finale mocking the tragedy that resulted in the deaths of 2,996 people.

Corporate writers are apparently oblivious to irony as this week’s episode exploits 9/11 in order to portray businesses as exploiting 9/11 for monetary gain. Clearly pandering to a liberal audience’s desire to see corporations accused of egregious evils, Wednesday’s finale, “Remember Day,” features a fictitious world where a business attempts to turn the anniversary of 9/11 into a profit making national holiday, complete with goose dinners, office parties, and red, white, and blue apparel.

The day following the 9/11 tragedy, Hampton Deville CEO Christian Deville strategizes how to capitalize on the tragedy. Two junior executives suggest creating a holiday to commemorate the attack:

Christian: Yesterday will always be remembered as a somber day in American history. Now more than ever, Americans need to shop at Hampton Deville affiliated stores. We have a moral duty as a company to monetize this tragedy, because if we don't, the terrorists win.

Kate: Excuse me, Christian? We have an idea. Why do people celebrate Christmas?

Sean: Trauma. Americans fight through hell all year, and to reward themselves at the end of it, they buy gifts.

Kate: Hallmark invented Valentine's Day; Walmart invented the Fourth of July; and Arbor Day, as we all know, was invented by Carl's Jr.

Kate: So we think it's time for Hampton Deville to create its own holiday

Christian: What are your names?

Christian: Kate and John…That's... an excellent idea. 2000 years ago, Jesus Christ was crucified, and now every Easter, people buy millions of dollars worth of chocolate bunnies. Starting today, we are going to plant the seeds for a new holiday. We just have to wait until the time is right. This can't feel opportunistic. It has to come straight from the heart. I'm thinking... 20 years seems appropriate.

As a result, in Corporate’s fictitious world, people celebrate Remember Day every year, treating the holiday like Christmas. Christmas music even plays throughout the episode. In tonight's episode, Christian rewards the two executives who devised the holiday with a big bag of money.

The Corporate writers are patting themselves on the back for their provocative episode. Star Weisman asked The Daily Beast’s Matt Wilstein to leak the finale episode to Fox News, saying, “If you could create a Twitter profile with you and a Nazi flag and just DM it to Fox News, that would really help us out.” Because anyone who watches Fox News and is upset by a TV show mocking 9/11 is a Nazi, of course.

As Corporate’s writers and crew hope to use the tragedy as a way to characterize businesses as greedy, heartless monsters, I suppose it is just a coincidence if their exploitation of 9/11 successfully enthralls their liberal audience and makes them a quick buck.