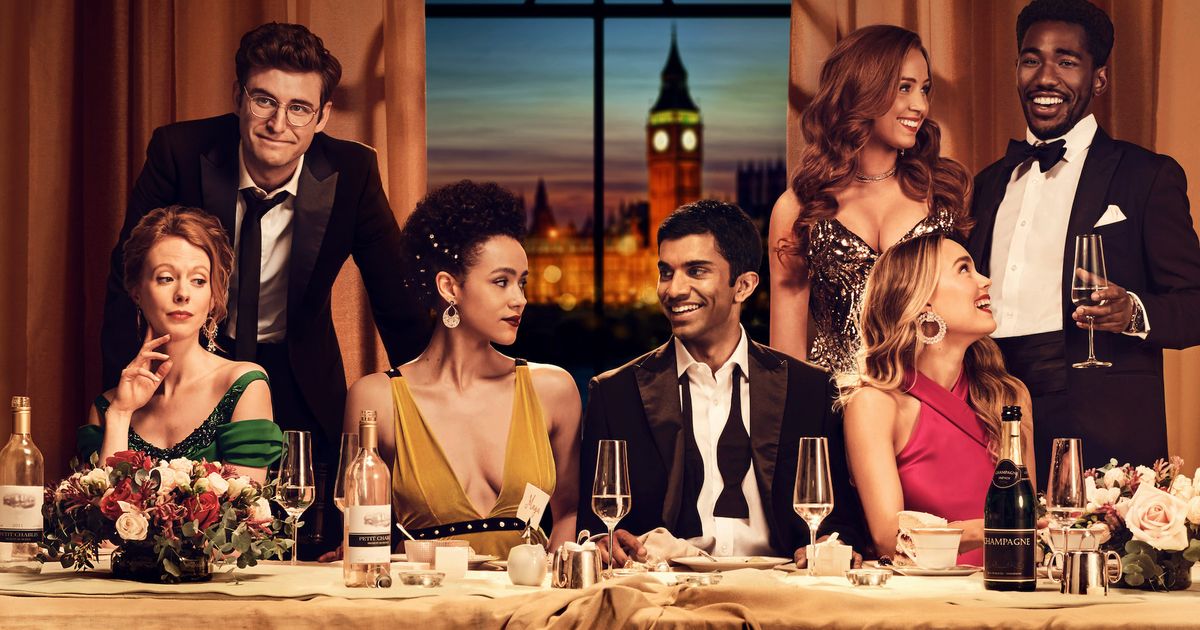 Hulu's Four Weddings and a Funeral tv adaptation is...odd. Co-created by Richard Curtis, who created the original movie, and Mindy Kaling (The Mindy Project), I had high hopes that this team could deliver a heartfelt, funny comedy that either left out the politics or was somewhat balanced. Instead, Republicans and conservatives are overtly insulted and mocked.

The show centers around Maya (Nathalie Emmanuel, Game of Thrones), an American political speechwriter working for Ted, a married New York Congressman running for Senate who is cheating on his wife with her. Maya's three best friends from college all live in London and we see the four of them reunite there for Ainsley's (Rebecca Rittenhouse, The Handmaid's Tale) wedding.

When Ainsley is left at the altar and Maya finds out that (shocker!) Ted was sleeping with other women, too, she begs Maya to stay in London with her instead of returning to America in episode two "Hounslow." Maya responds, "No, I gotta get back and figure out my life. Besides, if you're away from D.C. too long, Mike Pence turns your office into a chapel."

People really love to bash Mike Pence, somebody who seems like a decent guy, just for believing in Jesus. One of the central characters of this show is a Muslim and he's treated with the utmost respect, but the Vice President is fair game because he's a devout Christian.

Maya does, eventually, decide to stay and get a job in British politics. Here she is advising her new boss, Labour MP Perce Nighthall, in episode three "We Broke."

MAYA: The right is exploiting cultural anxieties to steal working-class votes, so Labour needs to be the party of economic hope.
PERCE: Yes, I've always said "the voter with an eye on his wallet doesn't care about the accent of the man across the street."

In those few lines, they managed to say that the left is the party of the economy and conservatives are racists.

But here's what the show doesn't seem to realize: The conservatives were the good, fair characters in just about every situation. In episode three, we find out Ainsley's parents (Texans who, it is strongly hinted, are conservatives) have been paying the rent on the boutique she runs and the mortgage on the lavish home she lives in. After her extravagant wedding falls through, her parents tell her she can come home to Texas or take care of herself. Are we supposed to think this was mean?

When Maya needs a job, the only lead she can find initially is with a conservative. He's honest, telling her politics is a small world and everybody knows that she slept with her married boss. Still, he wants to know: is she good at her job or did she sleep her way to the top? In a rage, she storms out of the interview. She can't believe he would ask her such a thing.

So, she puts on a sports bra and approaches her hero, Nighthall, at the gym to get him to give her a job. She's then completely stunned when he puts his hand on her back in the office. She's not even sure if he means to be inappropriate, but feels like a boundary has been crossed. He points out that she chose to be wearing only a bra when they met, so he didn't think they had a formal relationship. So, she quits. Where does she go? Back to the conservative MP who gives her another shot, splitting the job into two part-time jobs with the guy he has already hired.

So far only four episodes have been released, so we will see how it all turns out. At this point, it's sweet, but kind of a mess.