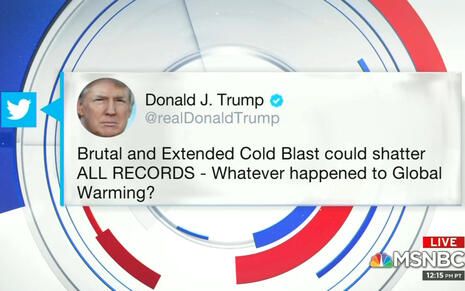 For the first time, the Intergovernmental Panel on Climate Change (IPCC) included Shared Socioeconomic Pathways (SSP), an attempt to factor in world politics to climate models, in its latest assessment report, released on Monday. Some alarmists have latched on to calling one particular SSP scenario “Trump World” in an attempt to fear-monger.

Columnist Ishaan Tharoor wrote in the Washington Post Tuesday, “Welcome to ‘Trump world,’ the climate future scientists fear,” and laid out a grim vision of our Trumpian future:

Imagine in the coming years a global politics shaped by resurgent nationalism. Governments prioritize their own energy and food needs, invest more in national security than in global development, and undercut international efforts to curb the emissions of greenhouse gases. In this future, carbon emissions will roughly double by the end of the century, hastening along with them the drastic array of catastrophic environmental effects linked to global warming, from the melting of the Arctic to heat waves that make whole regions uninhabitable to an intensification of the extreme droughts, wildfires and floods that have already blighted parts of the world this summer.

When some climate scientists speak casually, they categorize this imagined future as “Trump world,” a reference to former president Donald Trump’s rejection of climate science in favor of an aggressive nationalism that championed short-term economic growth no matter the looming calamities posed by a human-influenced climate change.

Sounds scary! Except: “That looks like an increasingly unlikely scenario,” Tharoor later admitted. “Trump is out of office, and other hard-bitten nationalists on the world stage — especially Brazilian President Jair Bolsonaro — are seen more as climate pariahs than as heralds of a broader global trend.” But it sure made for a good headline!

Tharoor’s piece was based on an article in Quartz by climate reporter Michael J. Coren who similarly used the ghastly specter of Trump to open his story:

In the doomsday scenario of the world’s climate modelers, every leader acts a bit like Donald Trump. Resurgent nationalism breeds regional conflicts and competitiveness. Security concerns prompt countries to retreat inward. Global development slows and inequality festers, while cooperation on energy and food security goals withers. Major countries such as the US abdicate leadership on climate action as emissions rise, and temperatures soar to searing levels.

Technically, it’s known as the Shared Socioeconomic Pathway 3 (SSP3), just one of many models published by scientists in 2016 to game out different futures, and included for the first time in reports developed for the Intergovernmental Panel on Climate Change (IPCC). But in casual conversation, many climate scientists simply call it “Trump World.”

“Trump World” is the middle of 5 SSPs, which range from scenarios with the most CO2 emissions cut (SSP 1) to least (SSP 5), but it’s still hyped as the “doomsday” one because it supposedly has the “highest-impact.” Of course, this is all based on a twisted left-wing interpretation of Trump policies.

“The biggest climate impact is not in the highest warming world,”  says Zeke Hausfather, a climate scientist at the environmental research group Breakthrough Institute (he was not involved in designing the models). “The highest-impact scenario is SSP3, Trump World, because so much of the world remains poorer.” A breakdown in international cooperation means emissions slow, but so do economies. Human suffering rises as societies are deprived of resources to adapt to rising temperatures.

Coren, too, was later forced to admit the premise of “Trump World” is overblown and outdated, “The ‘Trump World’ of SSP3 might have seemed plausible just a few years ago. But Trump has since lost re-election, Europe’s right-wing swing is stalled, and Brazil’s far-right president, Jair Bolsonaro, is battling for political survival.”

So, both hyped the boogeyman of a dire “Trump World” before burying the admission that it’s not really accurate while specifically mentioning Brazil.

But, do you know which important countries were not mentioned in either piece? China and India – the biggest global coal consuming countries and the number 1 and number 3 biggest CO2 emitters, respectively.

Once again, journalists’ myopic focus on blaming Trump and the U.S. as uniquely evil comes at the expense of calling out the world’s biggest problems.