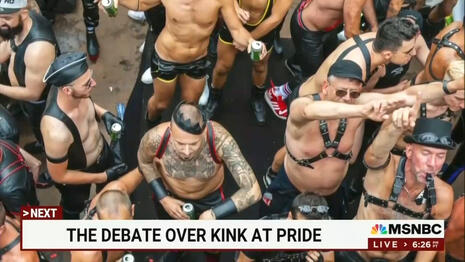 LGBTQ pride events have long been known for indecency and debauchery and one sick mother wants it to stay that way – for the children!

“Yes, kink belongs at Pride. And I want my kids to see it” disturbed writer Lauren Rowello penned in the Washington Post on Tuesday. It would be troubling enough if this was just a metaphor for passing things on to the next generation, but she was specifically referring to when her toddler and “elementary-schooler” experienced kink at a pride event, which makes it down right disgusting.

Rowello described attending “our first [pride march] celebrating openly as a family” 5 years ago in Philadelphia with her children and “wife,” a trans woman who wasn’t out at the time – “she typically only expressed her authenticity in the privacy of our home”:

When our children grew tired of marching, we plopped onto a nearby curb. Just as we got settled, our elementary-schooler pointed in the direction of oncoming floats, raising an eyebrow at a bare-chested man in dark sunglasses whose black suspenders clipped into a leather thong. The man paused to be spanked playfully by a partner with a flog. “What are they doing?” my curious kid asked as our toddler cheered them on. The pair was the first of a few dozen kinksters who danced down the street, laughing together as they twirled their whips and batons, some leading companions by leashes. At the time, my children were too young to understand the nuance of the situation, but I told them the truth: That these folks were members of our community celebrating who they are and what they like to do.

So, pretty much, LGBTQ pride is not about “love,” as they always claim, but about celebrating the kind of sex someone likes.

Somehow, this mother objects to the idea that “kink at Pride is a highly sexualized experience that children should be shielded from.” She claimed, “[P]olicing how others show up doesn’t protect or uplift young people,” instead it “will do more harm to our children than good.” How sick and deluded do you have to be to insist that shielding young children from sexual displays is harmful?

Of course, Rowello encouraged it, “When my own children caught glimpses of kink culture, they got to see that the queer community encompasses so many more nontraditional ways of being, living, and loving.” Remember, she’s talking about a toddler and another child under 13.

She then went even further, declaring [emphasis mine]: “If we want our children to learn and grow from their experiences at Pride, we should hope that they’ll encounter kink when they attend. How else can they learn about the scope and vitality of queer life?”

And, there it is. She said the quiet part out loud and pretty much admitted grooming; copping to what conservatives have long feared but told their fears were not only unfounded but homophobic.

Sexualizing kids, such as exposing them to “overt displays of sexuality” (Rowello’s term) at an early age, is EXTREMELY harmful. In fact, it’s child abuse and someone should investigate exactly what Ms. Rowello subjects her own offspring to, especially considering this next part (click “expand,” emphasis added):

Children who witness kink culture are reassured that alternative experiences of sexuality and expression are valid — no matter who they become as they mature, helping them recognize that their personal experiences aren’t bad or wrong, and that they aren’t alone in their experiences. I can’t think of a more relevant or important reminder for youth, who often struggle with feelings of isolation and confusion as they discover more about themselves and wrestle with concerns about whether they’re normal enough. Including kink in Pride opens space for families to have necessary and powerful conversations with young people about health, safety, consent, and — most uniquely — pleasure. Kink visibility is a reminder that any person can and should shamelessly explore what brings joy and excitement. We don’t talk to our children enough about pursuing sex to fulfill carnal needs that delight and captivate us in the moment. Sharing the language of kink culture with young people provides them with valuable information about safe sex practices — such as the importance of establishing boundaries, safe words and signals, affirming the importance of planning and research and the need to seek and give enthusiastic consent. I never want my children to worry that exploring any aspect of consensual sex or touch is too taboo.

That is a recipe for unmitigated disaster! If “alternative experiences of sexuality and expression are valid,” “their personal experiences aren’t bad or wrong” and no “consensual sex or touch is too taboo,” how could she possibly explain to her children why it’s not appropriate for them to experiment with other children – or even adults? Children are too young to understand or give consent, but mom teaching them about it in their prepubescent years might make them think that they can, providing a permission structure for them to “shamelessly explore” and thus harm other children or themselves by thinking it’s ok to help adults “fulfill carnal needs.”

She even thinks it is imperative to affirm kink "role models" to little children to keep the values and community of “Pride” alive (click “expand,” emphasis added):

If we’re afraid to talk about kink with our children, we prioritize the status quo — sanitizing and censoring their access to information about appropriate and normal self-expression. These are the very attitudes that made Pride necessary — and life-affirming — for so many of us in the first place, and we have no business imposing them on the next generation. Kink embodies the freedom that Pride stands for, reminding attendees to unapologetically take up space as an act of resistance and celebration — refusing to bend to social pressure that asks us to be presentable. That’s a value I want my children to learn. Affirming the kink community helps our children to love themselves and others with courage and resilience. If my wife and I had seen such fierce and determined role models as young people, we might have learned to be ourselves much sooner. We didn’t have that chance, but my children have that community in Pride, and I want to keep it that way.

But enough trying to make sense of such a non-sensical person – Rowello’s Twitter bio declares she’s an autistic former sex worker who goes by the pronoun “they.” I really feel horrible for her kids and pray they’re safe now and not too screwed up by their parents when they’re older.

Luckily, Rowello is facing a fierce backlash for her outrageous and dangerous ideas – even from some in the LGBTQ community. She tweeted her article, saying, “Keep kink in Pride for our kids' sakes!” and was promptly and properly ratioed (checkout the number of replies compared to likes!) and her retweets are almost 100% quote tweets, which means people are sharing her article with their own commentary instead of affirming her. 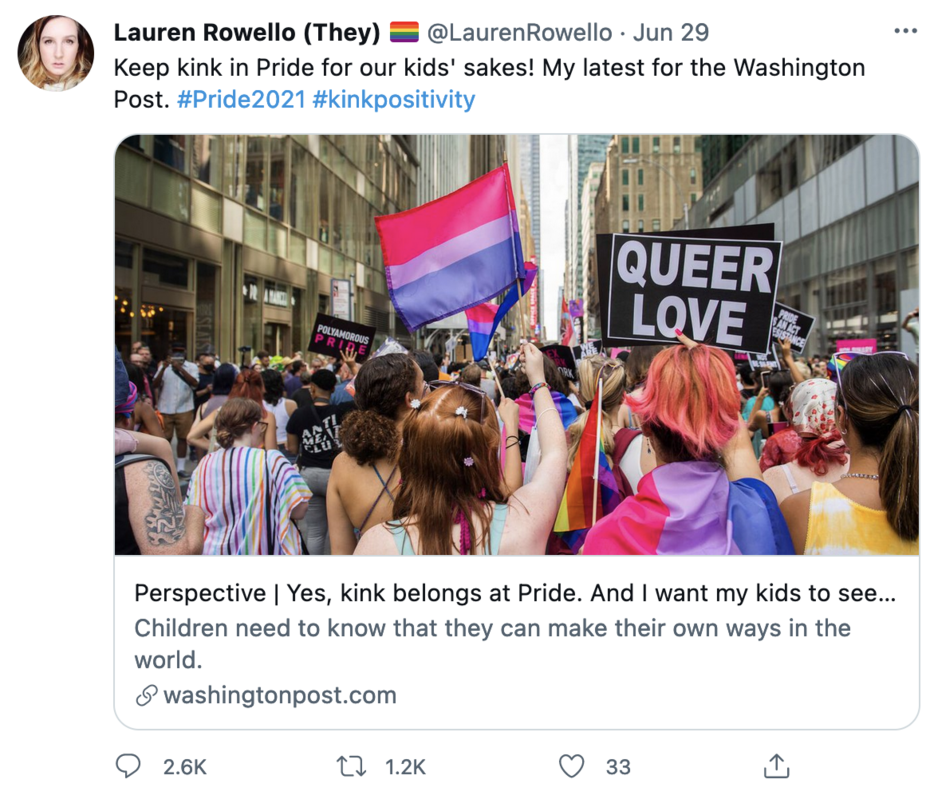