‘Scandal’ Lead Character on Abortion: ‘I’m Not Ashamed at All’ 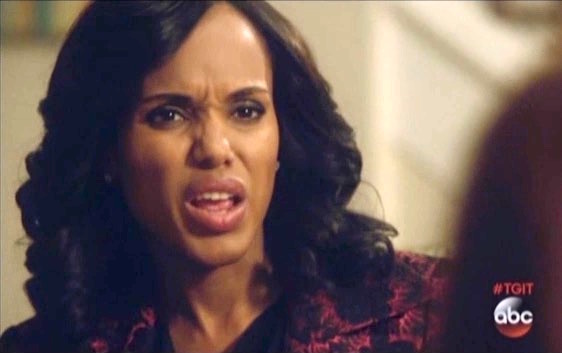 Since ABC's Scandal's winter finale in November ended with lead Olivia Pope (Kerry Washington) heartlessly killing her unborn baby to the tune of the Christmas hymn "Silent Night," the abortion has not been mentioned on the show. In fact, creator Shonda Rhimes was undecided about if she would bring it up again. When asked when President Fitzgerald Grant would find out Olivia aborted their baby, Rhimes responded, "My question is, does he have to? A woman made a choice about her body that she legally has the right to make. I haven’t actually decided, but I wonder sometimes." Well, Fitz still doesn't know, but now, finally, someone else does and the revelation of the abortion became a major plot point in tonight's episode "Trump Card."

Olivia and her former-employee-turned-campaign-nemesis, Abby Whelan (Darby Stanchfield), are discussing the oppo research they have on each other's candidates. Abby found out about the abortion, but didn't want to share that information to protect her friend, going so far as to let her candidate drop out of the race.

Olivia is unapologetic about the abortion, declaring she's "not ashamed at all" and wouldn't have been hurt by the revelation. And she doesn't even seem all that upset about how much it would hurt Fitz to know the truth.

Abby: I didn't have anything on Mellie.

Abby: The night Mellie won her filibuster, the night you moved out of the White House...

Abby: I didn't want to hurt you.

Olivia: Thank you. That would have been a smart move for a campaign -- taking down Mellie by shaming me. But the thing is, I'm not ashamed at all. The only person who would have really been hurt is him. It would have hurt him. And not just publicly. Abby. He doesn't know. No one knows. How did you find out?

Abby: Your father told me. And, Liv, I don't think he's done with you.

While Rhimes likes to promote abortion through her show and other lefties praised the "awesome" way she made Olivia's abortion seem like no big deal, the irony is that the storyline humanizes abortion in the opposite way as intended. This wasn't just an anonymous blob of tissue, this was Olitz's (the nickname given to Olivia and Fitz by fans) baby! This wasn't just a simple legal choice Olivia made, this was a decision that would devastate Fitz if he knew. This wasn't just an inconsequential medical procedure, it was an action that could destroy any chance Olitz might have of eventually getting back together, which the audience is emotionally invested in.

Furthermore, since the abortion, Olivia's character has gone downhill, crossing lines she never would have before, even killing another person and saying she had no regrets. (That person, however, had her kidnapped and deserved it, unlike her innocent pre-born child.) Instead of being the much-loved heroine in the "white hat," Olivia has gone to the dark side and become an unlikable anti-hero.

Feminazis might celebrate Olivia being shameless, but the rest of us see right through it and it is ugly.