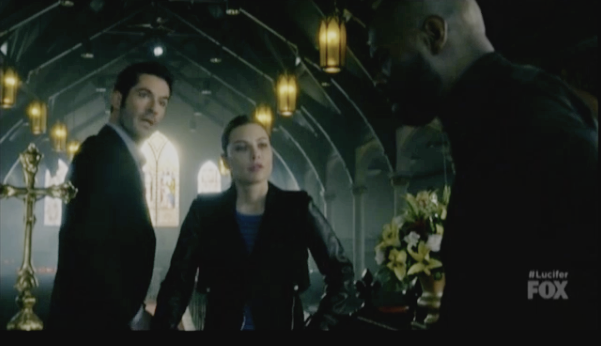 The day after Palm Sunday, we turn on the TV and see the devil in a confessional encouraging adultery and tempting a priest with stripper nuns. Welcome to FOX’s Satan-themed police procedural Lucifer.

In the episode “A Priest Walks into a Bar,” a Catholic priest goes to Lucifer Morningstar’s (Tom Ellis) bar asking for help in bringing down a neighborhood youth center being used as a front for an illegal drug operation. While Lucifer and LAPD Detective Chloe investigate, a man suspected of running the drug ring is killed.

Lucifer wants to believe that Father Frank, or as he calls him "Padre Pederast," is the killer – “What better to way to stick it to dear old Dad than prove that those who speak on His behalf aren't as virtuous as they pretend to be," he snarks.

As they check out Father Frank’s church, Lucifer spies a woman heading into the confessional and can’t help but climb into the priest’s side to sow the seeds of discontent, telling a woman to embrace and act on her sinful desires and ask for forgiveness later.

Woman: Bless me, Father, for I have sinned. It's been three hours since my last confession.

Woman: No, I just need more guidance. I'm still having lustful thoughts about another man.

Lucifer: Splendid. Who's the lucky fellow?

Woman: Um, my husband's limo driver. What should I do, Father?

Lucifer: Well, my dear, uh, you should embrace your desires.

Woman: Really? Uh, when I was here earlier, Father Frank told me I should be faithful to my husband.

Lucifer: Well, I don't know why you're listening to that fool. I mean, let's be honest, if you wanted to be faithful, then you wouldn't be fantasizing about your limo driver, now, would you, eh?

Lucifer: No, no, no, no, no, don't feel bad. You have those desires for a reason. You should act on them. I mean, you can always come back here, confess, and all will be forgiven. Isn't that how this system of yours works?

Woman: When you put it that way...

Chloe: Lucifer, what do you think you're doing?

Lucifer: For your penance, ten Bloody Marys and a good shag.

They soon figure out Father Frank isn’t a murderer, but the real killer wants him dead and shoots at the priest outside the church. The priest needs protection and Lucifer finds another way to offend everyone - bringing the priest to a nightclub featuring strippers dressed as nuns.

Lucifer: Well, your sanctuary just got shot to high heaven, Padre. But if you're looking to lay low, I believe I know just the place. Thought this might make you feel more at home, you know.

Fr. Frank: Sure you did.

But amidst all the debauchery, some good messages poke through. The priest reveals how a tragic accident that took the lives of his daughter and friends of theirs brought him to the Lord and he encourages others to have faith in God’s plan.

After Father Frank is gunned down in his church and is dying in Lucifer’s arms, the priest tells the devil, “I didn't understand why God put you in my path. But then it hit me. Maybe He put me in yours.” Lucifer scoffs at this and later curses God and His plans.

Lucifer: You cruel, manipulative bastard! Was this all part of Your plan? It's all just a game to You, isn't it? Eh? Well, I know punishment, and he did not deserve that. He followed Your stupid rules and it still wasn't good enough! So what does it take to please You? Break Your rules and you fall! Follow them and you still lose?! Doesn't matter whether you're a sinner! Doesn't matter whether you're a saint! Nobody can win, so what's the point? What's the bloody point?

Much could be done with these existential questions and Lucifer seems at times to want to attempt to grapple with some major theological issues, but examining the question of evil and the mind of God is way too sophisticated and nuanced for a campy show that revels in Lucifer’s flashy hedonistic lifestyle like this.

Skip the "deep thoughts" and cheap hits at Christianity, stick to the crime-solving duo of Lucifer and Chloe, and this could be a halfway decent show.