The 49th Annual Country Music Association Awards just wrapped up and while hosts Brad Paisley and Carrie Underwood said their goal was to not be political, they still managed to get in some cultural references and shots at the likes of Bruce Jenner (They actually said Bruce and not "Caitlyn!"), Donald Trump (Big cheer from the crowd), Josh Duggar (While Law & Order: SVU was devoting an entire episode to the Duggar family), Hillary Clinton (Shout out to the Justice Department emails), and Dr. Ben Carson (Bizarre hit on his speaking that turned into the lyrics of Paisley's song "Country Nation.")

Paisley: ♪♪ And Trump's leading in the polls.

Both: ♪♪ Totes. Cray Cray.
...
Paisley: Actually, Ashley Madison did have a big hit this year. Who can forget --

Both: ♪♪ Your cheating start never said beware ♪♪ ♪♪ it just said life's short have an affair ♪♪ ♪♪ bored with your wife and your sister, too ♪♪ ♪♪ your cheating side will tell on you ♪♪ ♪♪

Paisley: Josh Duggar.
...
Paisley: So, our goal is always to not be political on this show. But this election season, we reached out to all of candidates to see if they wanted to be a part of tonight's show.

Underwood: Yeah, we e-mailed Hillary Clinton but all we got was an auto reply from the Justice Department, I don't know what that was about.

Paisley: So we still don't know anything there. I called Ben Carson, I think I woke him up, because he said -- and I quote -- [mumbling]. Which I'm pretty sure was, "We're one big country nation, that's right." 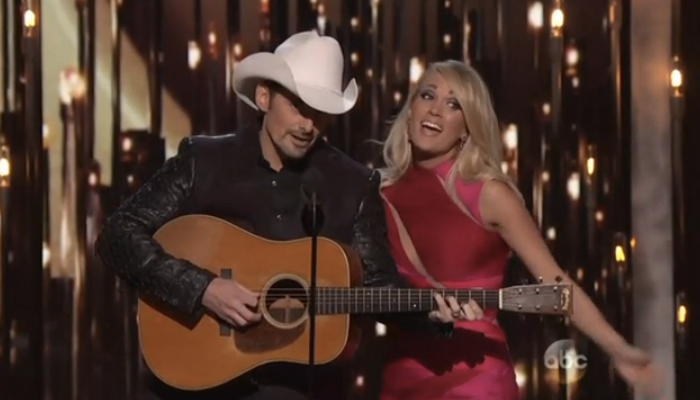