Mattel has Barbie fans mad once again because of their new Tokyo 2020 Olympic themed products. This new line of dolls was created to promote “inclusivity and innovation” but fans are angered because of their failure to represent Asians. The company’s spokesperson issued a backhanded apology to keep the raging leftists at bay, stating that it “fell short” and “fully receive and recognize the feedback.” 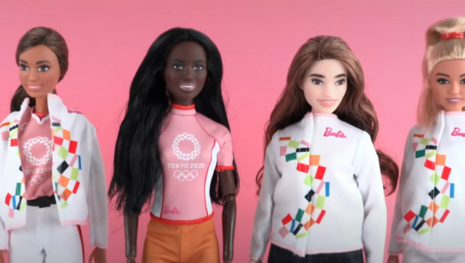 As with every other major corporation right now, Mattel has become woke and out of touch with real people. Back in 2019 Mattel released a “gender-neutral” Barbie doll, but not even that pleased the angry leftists who seem to influence culture because of their endless whining.

A very similar situation is occurring now and the real question is why Mattel even bothers to entertain these lunatics. At least there aren’t any trans-Barbies, yet.

In a press release from the company they explained that the “international product line,” which was released late last month, “highlights inclusivity and innovation,” “all to inspire a new generation of athletes and fans around the world.” But in the lefty land of entitled brats these dolls had quite the opposite effect.

A post announcing the dolls’ release on Twitter created a tsunami of complaints from screaming cat ladies who are much too old to be playing with dolls anyways.

Lol but there’s no asian barbies? Did we forget my fellow child to refugees @sunisalee_ already? Didn’t know asian girls didn’t win any gold medals at the #TokyoOlympics https://t.co/u9nAsYcUmu

Infuriating when from the looks of it, only certain girls are being empowered... https://t.co/cCcsjvHWkz

Mattel went straight to damage control because upsetting the people who are always upset about something is just unacceptable. The spokesperson told HuffPost that the company intended to represent Asians with the skateboarding Barbie.

Fostering a more inclusive world is at the heart of our brand and we strive to reflect that in our Barbie product line. With our Barbie Olympic Games Tokyo 2020 dolls, we celebrate a range of athletes to inspire kids to find their athlete within.

However, our intention to represent the Asian community with the Skateboarder doll fell short and we fully receive and recognize the feedback. Moving forward, we will work to find more ways to champion all representation and celebrate the amazing achievements of all Olympic athletes, who are showing us that anything is possible.

First it was an issue that Asian Barbies were ‘too Asian’ now, their ‘not Asian enough.’ Whatever happened to learning from your history, nothing ever makes the leftists happy. These are the same people who create new genders everyday because they don’t even like themselves. I mean, c’mon man.