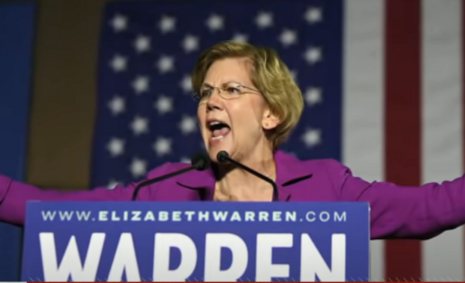 Massachusetts Senator and wannabe Cherokee princess Elizabeth Warren did an interview with none other than the leading source for leftist child indoctrination, Teen Vogue. She didn’t tone down her radical left-wing agenda and repeatedly referred to abortion and voting rights as “constitutional” and key to ensuring “the functioning of our democracy.”

Teen Vogue began by asking questions about the senator's efforts to destroy the filibuster, her cowardly colleagues in Texas who fled the state and the “suppression” of voting rights. Warren immediately took a jab at conservatives and the majority constitutionalist supreme court who she refers to as “hostile to these basic rights.”

Referring to legislation that has been passed in Texas and several other states Warren said “The Supreme Court is poised either to undercut Roe even further, or to overturn it altogether. They've already gutted a big part of the Voting Rights Act.” There is a “constitutional right to an abortion,” she continued.

An extreme right-wing minority wants to impose their will on the majority by rolling back voting rights and abortion rights. But Congress has the power to protect these basic rights, even against threats from the courts. And we must use it.https://t.co/pA4ehEMvwM

The senator also claimed that states are “doubling down” on “voter suppression and “preventing access to abortion.” This is why the Democrats cannot work with Republicans, Warren explained. "The days when we can pretend that a rational argument will produce a good bipartisan result, those days are just over."

Both voting and access to abortion are basic. They're about the functioning of our democracy and about the protection of personal autonomy.

What about the baby’s rights? The millions of unborn babies who are killed every year had their right to personal autonomy stripped away from them by people exactly like Warren. Now, she’s forcing her way of thinking onto thousands of teenage girls who read this magazine.

The gaslighting didn't end there however, the pro-baby killing senator said that “The right-wing extremists know that if they can keep people from voting, they've got a better chance to impose their views about abortion on an unwilling nation.”

The people didn't want you as president for a reason, Senator, and we don't want your opinions either.