Andrea Mitchell: Hillary Is ‘So Good and Adept’ At Handling the Press

Yet again, MSNBC has revived the narrative that Hillary Clinton is good at dealing with the press and answering questions. In recent weeks, this argument has been made several times by media members looking to downplay the former First Lady’s seeming reluctance to take any questions.

Making an appearance on Monday's Rachel Maddow Show, Andrea Mitchell talked up Hillary, claiming she's “so good and adept” at handling the press. To be fair, Mitchell made room for exceptions. She added that Clinton had struggled to respond to questions “about the emails and at some points during her book tour.”

Still, the Andrea Mitchell Reports host said that in Hillary’s 20 minutes (gasp!) with the press, she’d “clearly thought these answers through.” Mitchell also glowingly reported that the former Secretary of State laughed off her question about Mitt Romney’s criticism of Hillary's wealth.

Earlier in the segment, Mitchell talked about how Hillary – in contrast to 2016 presidential candidate Jeb Bush – is largely embracing her husband’s legacy and the legacy of Barack Obama. She observed that Hillary is “not running away from his [Bill Clinton’s] legacy, from his value system.” Yes, apparently Bill Clinton’s value system is now something to be embraced. Mitchell added that Hillary “has no apologies...for what they represent” as she moves forward with the campaign.

Within the last month Jeremy Peters of the New York Times made the case on Morning Joe that Hillary was “really good” at answering questions from the press. Just a few weeks earlier – on Andrea Mitchell Reports, as a matter of fact – USA Today’s Susan Page argued that it was a “mystery” as to why Hillary was avoiding questions, given her opinion that the former New York senator was quite talented at handling the press.

This phony narrative on Hillary doesn't seem to be changing any time soon for the liberal press.

ANDREA MITCHELL: I'm not sure that we really understood how she was going to straddle this or deal with it. And she’s embraced it. She is embracing Obama. She is certainly embracing her husband. She is not running away from his legacy, from his value system. She is talking about both of these Democratic predecessors. One whom she is married [to] and the other whom she served. She is distinguishing herself, though, from policies without being explicit. She certainly is not discussing the economy the way Bill Clinton of the Democratic leadership coalition in 1992 spoke about the economy or 1996 when he went for welfare reform.

There were a number of policies that she would not necessarily have supported, did not support inside the White House. Welfare reform is clearly one of them, it was very controversial with Donna Shalala, now head of the Clinton Foundation, with others in the cabinet, and presumably the First Lady, as well. But she is now moving to the left because the country has moved to the left and because she is under pressure from those who are in love with Elizabeth Warren, from those who are flocking to Bernie Sanders, and he is getting a lot of support from millennials, from others who find him to be very authentic and very principled. And she is trying to adjust to that. And she has certainly moved away from President Obama on trade. And that, of course, is a hot topic and was noticed, believe me, in the White House. That said, she has no apologies for them, not for their values, not for what they represent. And I think it is very artfully done and so far I think it could work for her.

MADDOW: Andrea, on that point about trade, obviously, Bernie Sanders had been just one of the people probably to the left of her in the Democratic Party who had been pushing her to give an answer on that. She had been avoiding giving an answer on that. She finally came out and said I'm with Nancy Pelosi on this, effectively. And Nancy Pelosi, on Friday, voted against the trade bill after keeping her cards very close to the vest heading into that vote. That happened today. Discussion of that, at least, happened today. In this press availability, she took questions today for about 20 minutes with the press. It’s been a real flash point, a real point of criticism that she hasn't been available to reporters. Is it your sense that that’s gonna change now? 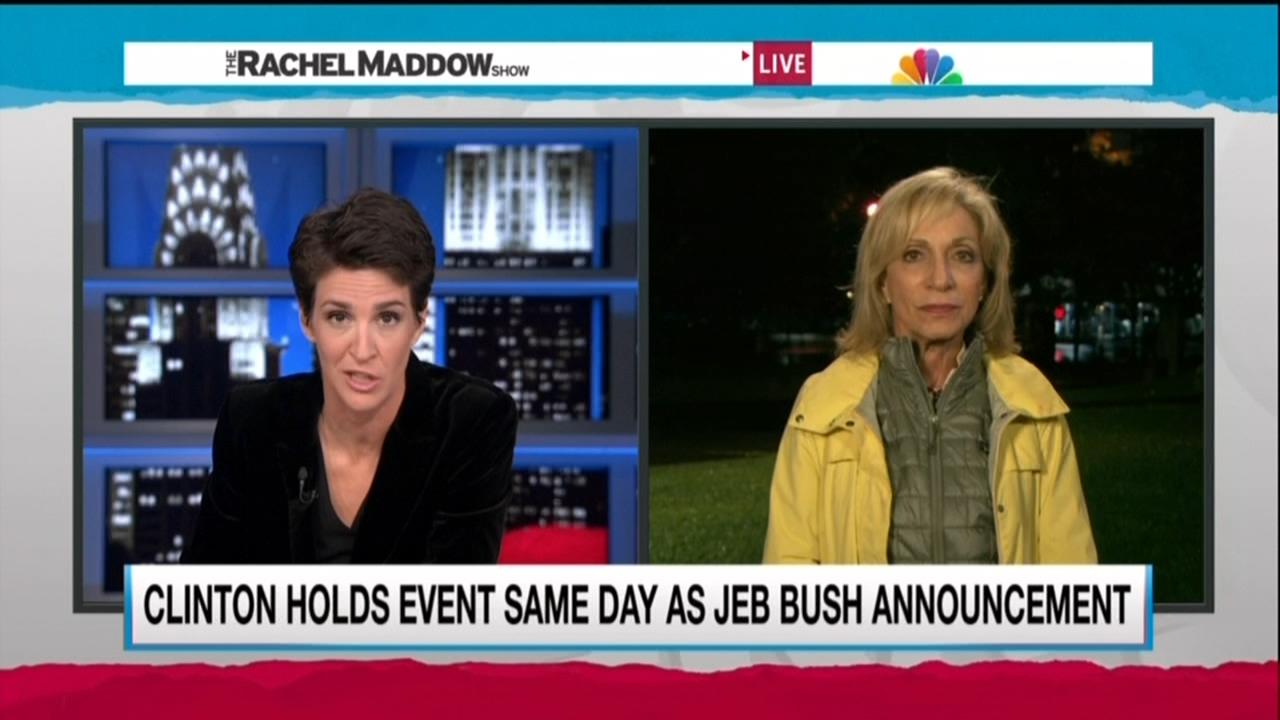 MITCHELL: I think it is. And I think that how often she does it is another issue. The fact that she spent 20 minutes talking to us, we knew that this was going to take place, lots of signals. It was very orderly. There were no shouted questions. I think it served her well. She’s so good and adept at handling press questions aside from instances like that U.N. experience talking about the e-mails and at some points during her book tour, but she clearly thought these answers through. And I think her answer about her wealth when I asked her about Mitt Romney's criticism was sort of laughter, Mitt Romney is criticizing me about my wealth.

His point was that she is going to get beaten up the way I was beaten up, said he, because her earnings, her speech earnings are so vast multiples of what other people make per hour. How can she be a populist? And what she said was American people don't begrudge other people's success. They just don't want to see people who are so successful because they lived the American dream and others have helped them and then they pull up the ladder behind them and say that they built their own log cabin. And I think that is an interesting answer.