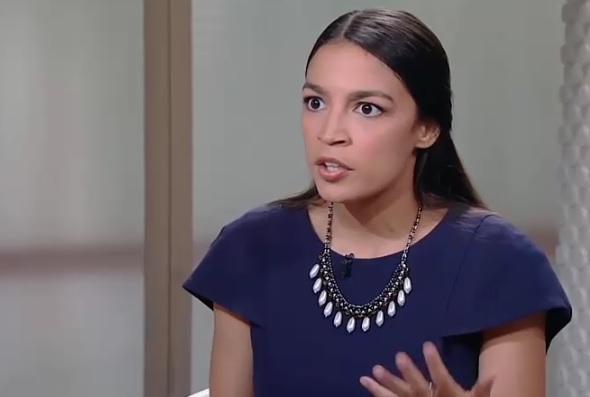 That issue included the latest installment of its “New Establishment” list. Ocasio-Cortez made the list along with “Democratic hopefuls” Ayanna Pressley, Andrew Gillum and Beto O’Rourke as “The Ground-Breakers.”

Although the four were jointly ranked 94th on the list of 100, Ocasio-Cortez’s image featured prominently in teases for the list. Vanity Fair staff reporter Tina Nguyen also interviewed her. Ocasio-Cortez called the right “insane people holding the country hostage” and said “we can’t compromise where we’re going,” in the course of the Q&A.

Nyugen asked, “How are you preparing to weigh the urgent desires of your progressive base — such as universal free college education — with the reality that most change in Washington is achieved through incremental compromise?”

“I tend to think that we as a party compromise before we even get to the table. When you’re dealing with these insane people holding the country hostage on the right, you can’t go in with your end point. You have to go in with a strong position,” Ocasio-Cortez replied.

After being asked what changes she wants in her own party, Ocasio-Cortez admitted her radical approach might not always be appreciated by fellow Democrats.

“There are certain issues where I’m going to make some Democrats mad if they’re trying to deliver paydays for Wall Street donors. But that doesn’t mean I’m going to burn the house down over it,” she said.

In other media interviews Ocasio-Cortez has called for growth of government spending to pay for things like “free college” and much more, but has been reluctant to say where trillions of necessary dollars would come from to pay for it.

As for being “media savvy,” as Vanity Fair put it, Ocasio-Cortez stumbled in early interviews including a Facebook Live where she claimed to have been “elected,” even though she’s only won her Democratic primary so far. She also claimed extreme poverty “is a form of violence.”