MTV’s Gore Town Hall Proves It Should Stick to Music 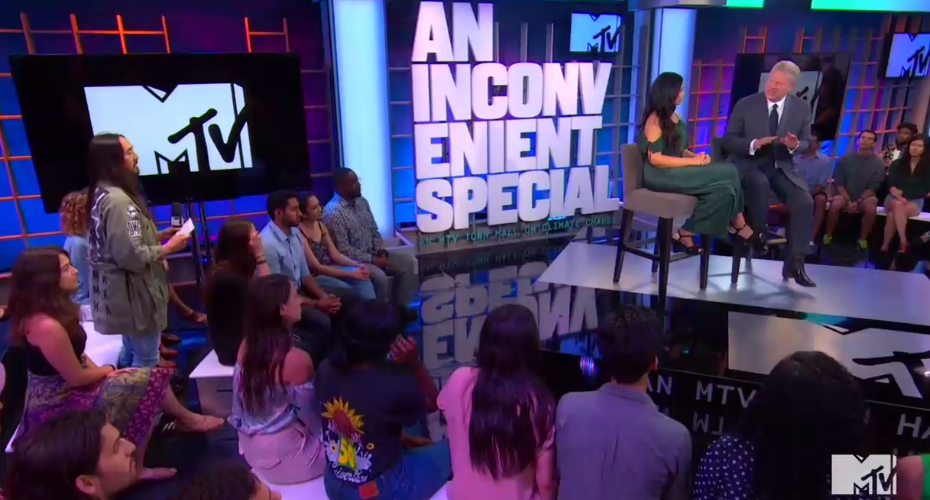 It wouldn’t be shocking for a television network known for programming gems like Jackass, Catfish, Teen Mom and The Real World, to lack perspective on serious matters — or to lack serious reporting.

Both deficiencies were on full display during “An Inconvenient Special” on MTV, starring former vice president Al Gore promoting his new film which is essentially his own reality television show anyway. He prefers the term “cinema verite.” The Aug. 2, town hall special was also scheduled for re-broadcast that night on BET, and on VH1 on Aug. 4.

MTV News correspondent Gaby Wilson hosted the event with Gore and a young army of people raised under the propaganda of his first film An Inconvenient Truth, and his Climate Reality Project.

Wilson reminded the audience about the 2006 film which “brought the climate crisis into the heart of popular culture and fueled a worldwide movement,” and praised Gore’s second film which will be in theaters nationwide Aug. 4.

Then she claimed, “Climate change just might be the most significant human rights issue facing our generation.”

Not the 40-50 million unborn children killed by abortion annually around the world, according to the World Health Organization. Not the millions of people, mostly women and children, trapped in human trafficking. Not genocide. But climate change.

The program was hardly filled with experts. Rather than talking to scientists — or even citing them directly, MTV stayed in its wheelhouse and relied on musicians for the show. Rounding out the cast of Gore supporters participating in the town hall were music producer and electronic music star DJ Steve Aoki and Latino rapper Fat Joe. Teen activist Delaney Reynolds of Miami was also on hand to teach Fat Joe all about the threat of sea level rise in Miami. Reynolds founded the Sink or Swim organization to urge children to get involved to stop sea level rise in Miami. Fat Joe is known for songs like What’s Luv, We Thuggin’, Get it Poppin, and Bet Ya Man Can’t Triz.

According to her blog, Reynolds is one of the many people Gore has convinced. She participated in a Climate Leadership Training course “a few years ago” in Miami, through Gore’s Climate Reality project. During the town hall, she was wearing a green ring pin. Exactly like the one Gore wears often, including in his interview with Trevor Noah on Comedy Central one night earlier. They are a symbol worn by supporters of Gore’s own Climate Reality Project.

Reynolds told Fat Joe in approximately 45 years “seas are definitely going to rise two to three feet because of the damage that we’ve already done to our environment.” Later she warned there could be 2.5 million climate refugees just from Miami-Dade county, Florida, because of climate change.

She didn’t exaggerate the sea level threat as dramatically as Gore has, but her claims were still higher than the UN IPCC’s report which forecast 1.7 to 2.4 feet by 2100. There was no mention of the dip in sea levels over the past two years. That would have spoiled the narrative.

There were no hard-hitting questions for Gore from audience members about his storm surge distortion (which he repeated during the town hall), inaccuracies like his extreme weather and hurricane claims, or his failed predictions such as an ice-free Arctic and snow-free Mt. Kilimanjaro. Even CNN lefty Anderson Cooper mentioned the last one.

A young man who was “vegan for climate reasons” wanted Gore to “reflect” on the environmental changes since his first movie. Another asked what to do to help the environment since President Donald Trump left the Paris climate agreement. Aoki asked Gore what cities, other than Miami, are also at risk. It was a gathering of the converted preaching to the choir.

Promoting political activism was a big part of the broadcast, as Wilson repeatedly told viewers to tweet at their governors to demand 100 percent renewable energy with the hashtag #beinconvenient. That’s the same hashtag being used to promote Gore’s brand new film, across Viacom’s many media platforms. Audience members also asked how to effectively “resist” the Trump administration, Wilson asked Gore what “local actions” could young people take and how important the midterm elections would be.

Wilson reacted with “wow” and called it a “very powerful clip” from the movie, which she told the audience and viewers “you better check it out.” It was a typical Yes Man response.

Gore already appeared on The Daily Show with Trevor Noah, on Viacom’s Comedy Central - as part of the $14-billion media company’s promotion of Gore, climate alarmism and the film An Inconvenient Sequel, which Viacom’s own Paramount is distributing. Ads for the MTV special aired during The Daily Show too.

MTV’s Climate page was also littered with promotion of Gore and the new movie.