DiCaprio: Climate Deniers 'Should Not Be Allowed to Hold Public Office' 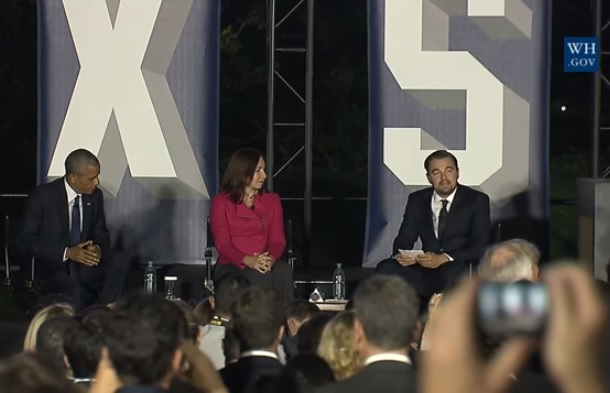 Actor Leonardo DiCaprio sat on the White House lawn on Oct. 3, and proclaimed that anyone who doesn’t not believe in climate change “should not be allowed to hold public office.”

“The scientific consensus is in and the argument is now over, if you do not believe in climate change, you do not believe in facts or in science or empirical truths and therefore, in my humble opinion, should not be allowed to hold public office,” DiCaprio stated at the livestreamed White House South By South Lawn (SXSL) event.

The invited crowd responded with cheers.

South By South Lawn, or SXSL, was an  all-day,Obama White House event hosting various liberal panel discussions about issues like food, sustainability and climate change as well as musical guests — inspired by the annual South by Southwest (SXSW) conference in Austin, Texas.

Following the talk, his latest climate documentary, Before the Flood, made its U.S. premiere to all those attending. The film will air on National Geographic channel on Oct. 30 — conveniently just eight days before the presidential election.

He said he wanted to make sure the film premiered before the 2016 election because action is urgently needed and the countries need leaders who think so.

Talking of his movie, which was a three-year project, DiCaprio said he and director Fisher Stevens “traveled from China, to India, to Greenland, to the Arctic, Indonesia to Micronesia to learn more about the effects of climate change on our planet and highlight the message from the scientific community and leaders worldwide on the urgency of the issue. This film was developed to show the devastating effects climate change is having on our planet and more importantly what can be done.”

Oddly, he didn’t point out the massive amount of carbon dioxide that had to have taken or give a rough estimate of the carbon footprint of the project.

A favorite of the climate alarmist news media, DiCaprio is often given a platform to stoke fear of global warming. However, he is almost as famous for the hypocrisy of his personal and business jet-setting lifestyle as he is for his many award-winning performances. His hypocritical acts abound: from flying 8,000 miles on a private jet from Cannes to NYC and back to collect an environmental award, to his multiple mansions, or renting the fifth largest yacht in the world from an Abu Dhabi sheikh to go watch the World Cup game ... in Brazil.

Engineer and energy strategist Robert Rapier wrote a column about DiCaprio’s hypocrisy and claimed his DiCaprio’s estimate that his carbon dioxide emissions are 11 tons per year is “nonsense.”

“According to the World Bank, per capita carbon dioxide emissions in the U.S. are about 19 tons per year. That’s of course an average, and rich people who take private jets and vacation on yachts have much higher carbon emissions than average,” Rapier wrote. Rapier agrees with DiCaprio that climate change is an urgent threat and wrote that the actor “diminishes his moral authority” by being a big polluter himself.

The Daily Mail estimated that DiCaprio racked up at least 90,606 miles flying on 18 separate trips just in roughly six months from the end of 2015 into 2016. Without knowing details of all those flights and whether they were private or commercial, it is impossible to know just how many tons of carbon his flights alone burns.

DiCaprio is clearly no average Joe, even if he does drive a Prius — when he’s not flying or riding on a yacht with supermodels.