CNBC’s on-air editor Rick Santelli has had it with the Biden administration’s gaslighting on the skyrocketing inflation plaguing the U.S. economy. 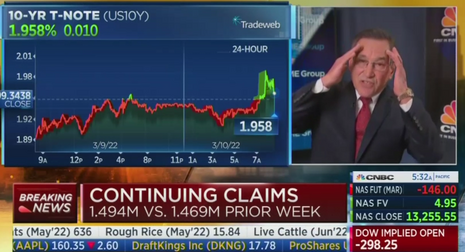 The Bureau of Labor Statistics released a report March 10 showing that inflation shot up 7.9 percent on a year-to-year basis in February for the highest level in more than 40 years and slightly beat expectations.

The index for gasoline prices, which spiked 6.6 percent, was one of the three “largest contributors to the seasonally adjusted all items increase” and “accounted for almost a third of the all items monthly increase,” the report says.

After reciting the devastating inflation numbers on the March 10 edition of Squawk Box, Santelli then ripped President Joe Biden’s ever-evolving narratives on inflation and appeared to accuse him of politicizing the issue.

“It’s going to be tough for the administration,” Santelli said. "Nothing has been more politicized than inflation.” He proceeded to list liberals’ excuses over the past several months: “First, it was ‘transitory.’ Then, ‘inflation is good.’ Then we went to ‘corporate greed,’ now we’re at Putin.”

Santelli analyzed that “no matter how you slice it,” commodities like energy are what’s been driving the inflationary pressures. “King Commodity is energy, and most people in the United States are reminded of that about what, every three to four days when they go fill up their tanks.”

This is not the first time Santelli has bucked the liberal media narrative on inflation. He ripped the Federal Reserve on Feb. 10 for dragging its feet on tightening monetary policy. Santelli unleashed: “Where’s the tightening been? Give me a break! We’re zero to 25. They’re still buying.” He continued: “I don’t see any tightening. I can’t imagine that you have a microscope bigger than mine.” He wouldn’t let up: “The Fed has done nothing! The Fed has done nothing! Blah blah blah blah blah.”