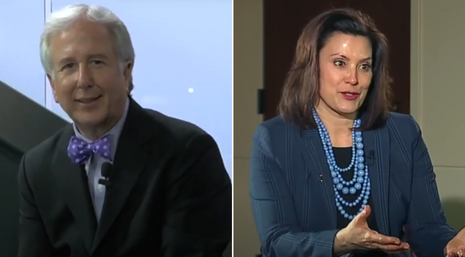 Winkler’s blog celebrating Whitmer Feb. 16 was headlined, “‘Woman in Michigan’ Governs the No. 1 Economy.” Winkler fawned, in part, about how Whitmer’s economic policies“outperformed the U.S. when Trump was in the White House and continues to do so 15 months after voters rejected his bid for a second term.”

He claimed that “Among 37 states with a population greater than 2 million, Michigan is No. 1 based on equally weighted measures of employment, personal income, home prices, mortgage delinquency, state tax revenue and the stock market performance of its publicly-traded companies.”

But a glance at those statistics showed Winkler was being disingenuous. Bridge Michigan released a report 27 days before Winkler published his op-ed headlined, “Study shows Michigan's economy still struggles to compete with other states.”

The annual benchmarking report by Business Leaders for Michigan “put Michigan at 29th among the 50 states for economic growth, a ranking that Donofrio called ‘middle of the pack’ after comparing it to its initial position of 49 in 2010,” according to Bridge Michigan. But Winkler, creating a graph based on a manufactured “economic health improvement” figure, appeared to only cherry-pick states that had populations over 2 million. [Emphasis added.]

But as Bridge Michigan pointed out, the state’s performance in comparison to other states in 2022 is not nearly as impressive as Winkler let on:

CATO Institute Director for Tax Policy Studies Chris Edwards tweeted that Winkler was being “deceptive.” Winkler’s article included a misleading graph on Michigan and overall U.S. nonfarm employment dated April 30, 2020-Dec. 31, 2021. But as Edwards noted in his tweet, Winkler’s “second chart has Michigan employment up 25% and US up 14% since April 2020. But if you start in March 2020, Michigan is down 4% and US is down just 1%. See Fed data.”

Edwards stated in comments to the MRC that “Michigan plunged more at the start of the pandemic and so naturally it bounced back more.” Edwards added that Winkler “says ‘Whitmer today presides over an economy that improved the most in its history since the pandemic began two years ago.’ But the pandemic didn’t start in April, it started in March or earlier.” Sounds like Winkler was cherry-picking the time period to fit his narrative. [Emphasis added.]

Deceptive reporting by Bloomberg. His second chart has Michigan employment up 25% and US up 14% since April 2020. But if you start in March 2020, Michigan is down 4% and US is down just 1%. See Fed data https://t.co/jz8v4ShaCZ https://t.co/1skFfrYCPj

Edwards also went after Winkler on another front. Winkler praised how “Michigan under Whitmer has become a standout for investors. In the market for local government debt, the state's AA-rated bonds returned 5.6% (income plus appreciation) since April 2020, outperforming” neighboring states. But as Edwards told the MRC, “what’s so great about AA bonds? That’s a low rating, meaning Michigan taxpayers are paying more for borrowing than better-run states. If Whitmer is such a great manager, why hasn’t she increased Michigan’s bond rating to AAA?”

Conservatives are under attack. Contact Bloomberg News at letters@bloomberg.net and demand it quit being biased in favor of a leftist governor and report economics news fairly.