The Washington Post is going to have to cope. 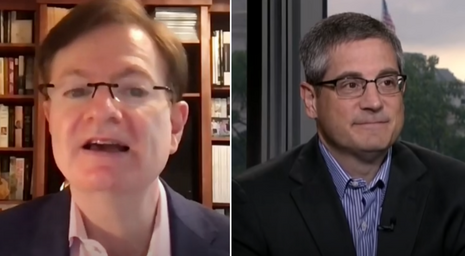 Its dismissal of Sen. Tom Cotton’s (R-AR) warnings about the Boston Bomber getting paid under President Joe Biden’s gargantuan stimulus bill has resurfaced to haunt the rag.

Post fact-checker Glenn Kessler and opinion columnist Paul Waldman both went after Cotton for suggesting that terrorist Dzhokhar Tsarnaev could receive a $1,400 payment under Biden’s stimulus signed in March. But in a Jan. 6, 2022, update to the “fact-check,” The Post partially reneged on its claim that Cotton was in the wrong.

Democrats in the Senate voted against a measure last year that would have prevented stimulus payments from going out to violent prisoners like Tsarnaev, who was responsible for the murder of three people and injuring more than 260 in a deadly bombing in 2013. “Every Democrat voted to send checks to prisoners, and every Republican voted to stop prisoners from getting checks,” Cotton said in a March 8 tweet. Kessler wrote one of his phony “fact-checks,” in part, going after Cotton’s March 8, 2021, warning, calling it “scaremongering” and “hyped up.” Waldman mocked Cotton for a March 6 tweet making the same warning about Tsarnaev. “The truth is that Cotton has no idea whether Dzhokhar Tsarnaev is going to get a relief check through the American Rescue Plan or not (it would depend on whether he filed a tax return recently),” Waldman bleated. But it turns out that Cotton was right all along.

Now that the Boston Bomber received his stimulus check from Biden's slush fund, I'm looking forward to the @washingtonpost updating this fact check.

Remember—every Democratic Senator voted against my amendment that would have stopped prisoners from getting checks. pic.twitter.com/pHaXkb7vkn

A newly released court document showed that Tsarnaev did, in fact, receive a $1,400 “COVID relief payment” on June 22, 2021, just over three months after Biden signed his stimulus into law. But in Waldman’s premature screed against Cotton’s warnings about Tsarnaev, “[T]his is even more repugnant than the inane culture war faux-controversies Republicans have been trying to stir up of late over everything from Dr. Seuss to Mr. Potato Head.”

Kessler, on the other hand, had to revisit his “fact-check” after Cotton’s team emailed him demanding an update. “We take such requests seriously and are always willing to review a fact check in light of new information,” Kessler said in an attempt to salvage the error. He admitted that “in retrospect, the use of the phrase ‘scaremongering’ was inappropriate.” In addition, “The term ‘hyped up’ in the headline went too far as well,” Kessler said. Kessler’s update, however, was slapped on the bottom of his original article, leaving the original headline in place with no initial indication that the article had been corrected until the fifth paragraph which stated, "This 2021 fact check has been updated with a new Pinocchio rating."

Kessler still tried to double-down by saying Cotton was fact-checked primarily because Cotton suggested that Tsarnaev getting COVID-19 relief funds was a result of “something Democrats did, when he had previously voted for legislation with the same language that allowed for checks to be issued to prisoners.” This is a very weak rebuttal. The GOP measure was specifically engineered to halt payments from going to prisoners, fixing an issue that Cotton said was implicit in two other COVID-19 relief bills passed in 2020 that allegedly could only have been fixed at the time through litigation. In essence, the GOP legislative fix to stop COVID-19 relief money going to violent criminals like Tsarnaev failed precisely because Democrats went on record voting against it. Still, Kessler conceded that “Cotton’s predictive powers should be acknowledged. He said the Boston bomber would get a stimulus check — and Tsarnaev did.”