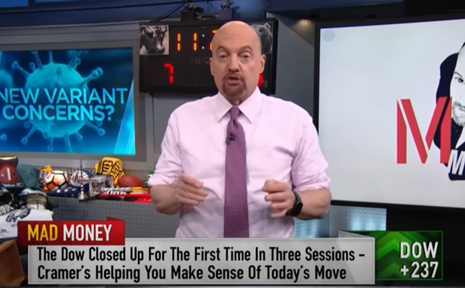 Cramer took precious airtime during Monday's edition of CNBC’s Mad Money to express his fury at Americans who won’t get the jab: “It's time to admit that we have to go to war against COVID.” Then came Cramer’s dip into absurdity: “Require vaccination universally. Have the military run it. If you don't want to get vaccinated, you better be ready to prove your conscientious objector status in court.”

It was like Cramer was trying to sell the COVID-19 spinoff of Mel Gibson’s Hacksaw Ridge (2016). He continued patronizing unvaccinated Americans: “You need to help in the war effort by staying home until we finally beat this thing.”

Cramer chose to kick off his bumbling segment by fearmongering over the omicron COVID-19 variant: “How do we finally put an end to this pandemic? How do we save lives and get business back to normal so everybody can put dinner on the table?” Here was his idea: “Simple. The federal government needs to require vaccines, including booster shots, for everyone in America by, say, Jan. 1.”

The CNBC host couldn’t stop himself. He spewed bile at Americans: “We have immunocompromised people who are incubators for every variant to come, walking around lawfully unvaccinated? That’s psychotic!” Cramer must have missed that “[p]eople inoculated against Covid-19 are just as likely to spread the delta variant of the virus to contacts in their household as those who haven’t had shots, according to new research,” as Bloomberg News reported Oct. 28.

We have companies that have tried hard to get people vaccinated now backing down. We have governors who want to be president by grandstanding on a foolish state’s right issue, the right to get sick and get other people sick!

Conservatives are under attack. Contact CNBC at (201) 735-2622 and demand it distance itself from Cramer’s wild call for a military-run universal vaccine mandate.