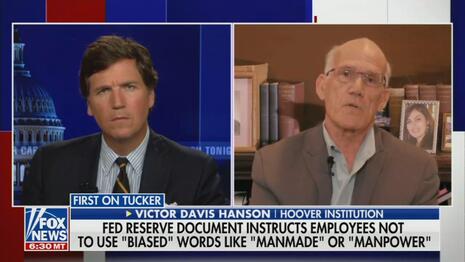 Fox News host Tucker Carlson said during Thursday's edition of Tucker Carlson Tonight that he obtained a Federal Reserve memo instructing employees to dispense with “offensive” words and phrases. Carlson said these words included: “‘Founding Fathers,’ ‘man-made,’ and singular pronouns like ‘he’ or ‘her.’” Hanson was not having any of it.

Hanson explained that the Federal Reserve being woke was “characteristic of all bureaucracies, that when they can’t solve an existential problem, they always go to the trivialities that they’ve done something.” Hanson then took a sledgehammer to the Federal Reserve: “[L]ook at the Federal Reserve. You know, we may have six to seven percent inflation, right now, per annum. And we have 2.8 mortgage rates. That’s a gap. And what are they doing? They’re looking at pronouns.”

But Hanson proceeded to point out terrible economic data that made the Federal Reserve’s virtue-signaling appear even more atrocious. “We have a $30 trillion deficit, debt, and a trillion-dollar annual deficit. They don’t have a clue on how to handle that, but they do want to focus on these trivia,” Hanson analyzed.

But the actions of the Federal Reserve, according to Hanson, are reflective of a more dangerous and dystopian agenda on the left. Hanson warned:

It’s also characteristic, I think Tucker, of the left. They always want to be a cultural revolutionary. So they want to go back in the past and cancel people out, and rename streets,  and buildings, and universities and topple statues and change the language. That’s what the Soviet Union did. And then they think in the present, they [are] starting in Year Zero.”

Hanson also noted that the left’s Orwellianism is being carried out by President Joe Biden. According to Hanson, “The Biden administration believes that after a thousand years of usage in the English language, they, in their infinite genius, have invented new words that nobody ever thought of.” He concluded facetiously: “Therefore, this is the beginning of a new, I don’t know, paradise or utopia.”