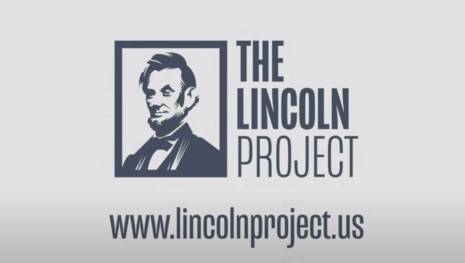 The Lincoln Project “is looking to beef up its media business after the election,” according to a new scoop by Axios. The report noted that the group has been “in talks with the United Talent Agency (UTA) to help build out Lincoln Media and is weighing offers from different television studios, podcast networks and book publishers.” The group, which is run by disgruntled NeverTrumpers like political strategist Rick Wilson and MSNBC blowhard contributor Steve Schmidt, “has transformed from an election-focused advertising PAC into a media company with millions of followers,” reported Axios.

“The group, formed in late 2019, has been approached by several media and entertainment companies and podcast platforms looking to launch franchises from its brand,” according to Axios. In addition, “The group is currently working with a documentarian and a motion picture producer to create a non-fiction film after the election. It's also attracted interest from TV studios looking to work with the Lincoln Project to help develop a ‘House of Cards’-like fiction series.”

“A few linear TV networks have indicated interest in having Lincoln Project's streaming show ‘LPTV’ on their networks,” according to a source cited by Axios. Sounds more like NeverTrump TV.

The Lincoln Project's “current media efforts were never meant to be spun out into independent media ventures, but they've grown quickly enough to catch the attention of Hollywood heavyweights,” Axios explained.

But there’s a caveat. The group’s “brand of Republicanism may have a limited future in a country where Trump has long commanded unquestioning support from vast swathes of the GOP,” Axios said. The outlet said the group “may also have difficulty sustaining interest after Election Day.” [Emphasis added.]

The group has dumped millions into disgusting anti-Trump advertising spots, “all of which have been produced in-house,” according to Axios. For example, the group released an anti-Trump ad July 1, tying Trump to a mock "endorsement" by Russian President Vladimir Putin.

Open Secrets reported that The Lincoln Project had spent “nearly $32 million on ads attempting to unseat Trump and his allies in Congress,” making it one of the top spending outside groups. Axios attributed this amount of spending capability to the group’s media successes that have “helped it secure record levels of fundraising.”