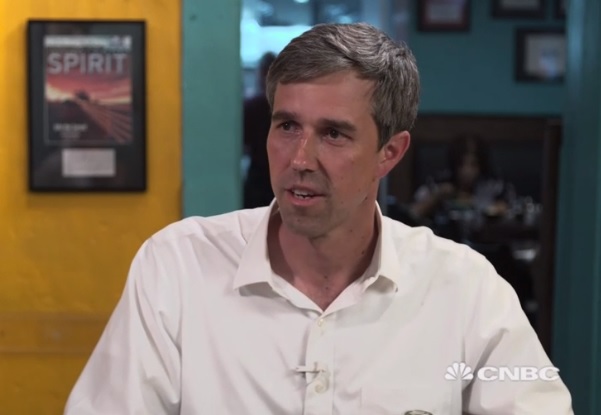 Harwood often lets his liberal views show on CNBC. CNBC.com described the interview as O’Rourke “filling in the blanks” on his economic plans which included raising taxes. Harwood raved over O’Rourke’s “charisma and youthful energy” despite his underwhelming performance in the first Democratic debate.

At the start of the interview, Harwood did ask O’Rourke why he omitted an economic tab on his official campaign website. O’Rourke said, “We’ll get it fixed on the website. It’s obviously fundamental to our success as a country.” But Harwood didn’t press him further on how it could be “obviously” essential when it was skipped over.

Harwood tried to paint O’Rourke as a moderate for “trying to straddle” between far-left candidates like Sen. Elizabeth Warren (D-MA) campaigning for “deep, fundamental structural change” on the U.S.’s tax and regulatory system, and those who wanted to move “more slowly and more incrementally.”

“I feel like I’m just trying to do the right thing,” O’Rourke answered. He brought up his proposals to implement universal pre-K, a minimum wage of $15 per hour, and “guaranteed high quality universal healthcare.”

To his credit, Harwood did briefly call O’Rourke out for failing to answer NBC debate moderator Savannah Guthrie’s question on whether he would raise the top marginal tax rate to 70 percent. But he did not challenge O’Rourke’s desired tax increases.

“[70 percent] It’s too high,” O’Rourke said. He lamented the “fundamental inequality of this economy,” and called for rolling back some of President Donald Trump’s tax cuts, including the corporate and top marginal rates to 28 percent and 39 percent, respectively.

O’Rourke said he supports a tax on capital gains and dividends to “generate the revenue necessary” to pay for investments in education, health care, and “affordable” college. He agreed with Harwood about “wealth disparities that make it so difficult” for some Americans to succeed.

Harwood also offered O’Rourke an opportunity to take a dig at Trump on the U.S.-China trade war, asking, “Does it frustrate you as a Democrat that many of those farmers are still going to vote for [him]?”

After saying no, O’Rourke replied that the “onus” was on him to convince farmers to vote for him instead of Trump. He also accused the president of “taking us into a war” without support from America’s allies and “turning his back on Canada and Mexico.”

“With every single threat or situation we face, we have bucked our allies and friends, and any capacity to meet these challenges successfully,” he said. “He has diminished our standing in the world and weakened our security and our ability to be successful when it comes to trade.”