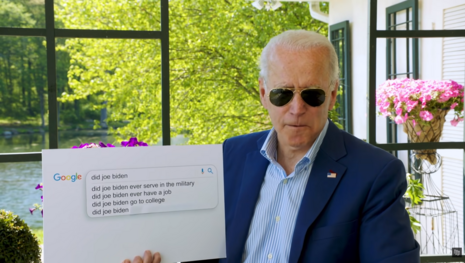 CNBC didn’t mention any NTUF findings until the 29th paragraph. Instead, CNBC played the race card and distracted from the core issue of how student loan cancellation would affect taxpayers.

“Black students and graduates take out more student loans than the average white borrower, and it’s harder for them to pay their loans back. Four years after graduation, the average Black borrower owes $53,000, while the average white borrower owes $28,000,” CNBC said, citing the liberal Brookings Institute. Then came the kicker: “Statistics like that lead some experts to say that Black borrowers specifically need more than $10,000 in loan forgiveness.”

But Elder exposed how Biden’s student debt forgiveness scheme would, in fact, force the U.S. working class to subsidize the most prosperous Americans.

“The bulk of the beneficiaries of this student loan forgiveness will be upper class people, many of whom went to expensive colleges, got advanced degrees like masters and like Ph.D.’s,” Elder said.

Graduates of Tribe’s law school are some of the most successful in the country, making a median salary of $143,000 with “little or no experience” after graduation, according to Forbes.

Even liberal John Hopkins University professor Marc Goldwein warned that what Biden is doing would exacerbate the very race issue that CNBC used to clamor for debt cancellation.

Eighty-seven percent of people who didn’t go to college are “people of color,” he said.

Goldwein added that sending “everybody another round of checks to pay for their inflation costs” will actually hurt all Americans because handouts on student debt would actually “make inflation worse.”

Conservatives are under attack. Contact CNBC at cnbcnewspr@nbcuni.com and demand it report on how student debt “forgiveness” unfairly benefits the wealthiest Americans and worsen inflation.