I’m the Taxman: Bloomberg News Says IRS Would Be Better If GOP Didn’t Cut Its Budget

Bloomberg News blamed Republicans on Monday for not giving the IRS enough money or support just days after the Democrat-run Congress passed horrendous legislation that will give the agency 87,000 additional agents and an $80 billion bankroll to boot. 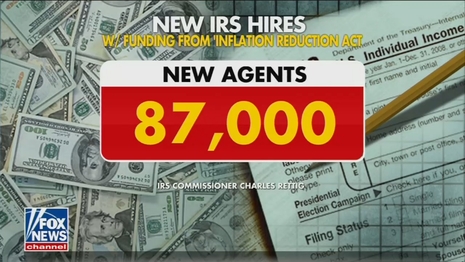 “The agency’s new funding will help fight tax cheats, but it may not be enough to repair the damage from years of Republican budget cuts,” argued Bloomberg News reporters Laura Davison and David Ingold.

The liberal outlet doubled down on blaming Republicans for taking on the agency head-on for wasteful spending. Bloomberg tweeted that the “IRS’s $80 billion infusion is a lifeline, not a steroid boost.”

But Bloomberg News attempted to shield the IRS and Democrats from recent criticism of their 87,000 strong army of tax auditors.

“The IRS and Democrats have moved to reassure Americans that the additional audit activity will affect only those making $400,000 or more and that additional staff includes a range of positions—not just enforcement officials. They’ve also advised that they won’t carry weapons,” they said [emphasis added].

But what’s all this about weapons?

The official IRS.gov website lists the job requirements for joining as an IRS Criminal Investigation Special Agent. One major requirement is to be “legally allowed to carry a firearm.” Under major duties, the agent must be willing “to protect him/herself or others from physical attacks at any time and without warning and use firearms in life-threatening situation [sic]; must be willing to use of [sic] force up to and including the use of deadly force.” [Emphasis added].

Davison and Ingold excluded any mention of the firearm language in the IRS’s actual job posting, which was only a Google search away. And while it seems pretty clear that IRS agents will carry firearms in line with the job listing, the leftist outlet turned to Sen. Ron Wyden (D-OR) to downplay the fact that some IRS officials would carry weapons.

Wyden, for his part, suggested the notion of IRS agents carrying weapons simply wasn’t true, according to a statement he made this month: “It’s unbelievable that we even need to say this, but there are not going to be 87,000 armed IRS agents going door-to-door with assault weapons. This is funding for answering phone calls and upgrading computer systems.”

Then, after spending 1,088 words trying to convince readers that there’s no need to fear the IRS Bloomberg News undercut its own point by suggesting readers take a look at this story: The IRS Is Coming for Your Venmo Income.