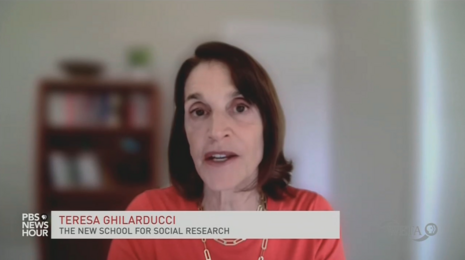 In Bloomberg Opinion’s world, inflation would hurt Americans less if they simply took the bus, ate lentils and let their pets die from cancer. The poor need to behave, after all.

Based on that op-ed, professor of economics at the New School for Social Research Teresa Ghilarducci might want to consider running for president of the Out Of Touch Association.

Ghilarducci gave some truly condescending advice to Americans struggling under record inflation in her Bloomberg Opinion piece headlined, “Inflation Stings Most If You Earn Less Than $300K. Here’s How To Deal.”

She gave some truly condescending advice to Americans struggling under record inflation: take the bus, stop buying in bulk and try lentils instead of meat. As Bloomberg Opinion tweeted in summary: “Nobody said this would be fun.”

Ghilarducci ominously added that animal lovers across America might want to “rethink those costly pet medical needs. It may sound harsh, but researchers actually don’t recommend pet chemotherapy – which can cost up to $10,000 – for ethical reasons.” In other words, rising inflation may be bad news for people, but try being a dog.

Conservative influencers on Twitter tore the article apart. Fox Business host Charles Payne tweeted: “Let Them Eat Lentils? The elites want you to stop crying about higher costs and make adjustments. Including letting Milo go to dog heaven (not sure they believe such a place exist[s]) if the vet bills are too high. But would these draconian moves really counter runaway inflation?”

The elites want you to stop crying about higher costs and make adjustments. Including letting Milo go to dog heaven (not sure they believe such a place exist) if the vet bills are too high.

But would these draconian moves really counter runaway inflation? https://t.co/INZTLp2FZg

Rapper and political commentator Zuby responded: “They forgot the most important one… ‘Stop being poor.’”

They forgot the most important one... "Stop being poor." https://t.co/GgQp1ZCwJY

Advice from elitist New Yorkers who:

• Don't know how to drive
• Pay ten dollars for a banana
• Don't know how to cook at home
• Think a hard day's work is sitting in Starbucks for two hours browsing Twitter, whilst thinking about their "novel" https://t.co/744elyMBGL

And if gas prices are a concern, Ghilarducci proposed that “[n]ow may even be the time to sell your car.”

She also made another unappetizing appeal to Americans on food: “...cut out the middle creature and consume plants directly. It’s a more efficient, healthier and cheaper way to get calories.” Ghilarducci hedged, “[t]hough your palate may not be used to it, tasty meat substitutes include vegetables.”

The professor concluded her story with some of the positive benefits of inflation: creativity. “Try to be as flexible and creative as possible. Scientists tell us our brain plasticity will improve by trying novel things.”

To her credit, that was certainly a creative spin on positive effects of inflation.

The political satire website The Babylon Bee published a response to Bloomberg Opinion’s condescending op-ed with the aptly headlined, “8 Ways To Deal With Inflation If You’re One Of Those Poor People Making Under $300K.” The second suggestion on their list: “Try not eating.” The reason? “A 365-day fast can do wonders for your weight problem.”

Conservatives are under attack. Contact Bloomberg Opinion at letters@bloomberg.net and demand it stop publishing absurd and patronizing op-eds on how regular Americans can survive rising inflation.