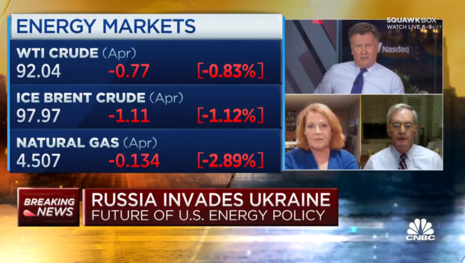 CNBC host Joe Kernen embarrassed President Joe Biden’s environmentalist cheerleaders who fought to keep oil in the ground because of so-called “climate change” while blaming former President Donald Trump for high gas prices. It’s as if leftists want to have their cake and eat it too.

Kernen showed that not everyone has been fooled into believing high gas prices were a result of Trump’s policies. On the Feb. 25 edition of Squawk Box, he came out swinging: “Ironically, the same people that were urging and cheering on the Biden administration to leave the oil in the ground are now saying, ‘Whoa! He didn’t do that. It was Trump. It was the last year — the rigs already went down, and the free market did it.’”

Kernen explained that left-wingers blaming Trump for the rigs going down last year was a “clumsy bit of sophistry” because “it was the pandemic which put rigs down, you know, and demand went to zero.”

The U.S. Energy Information Administration reported that demand for gas dropped dramatically in the U.S. and across the world as a result of the pandemic. Former Senator and CNBC guest Judd Gregg (R-N.H) also called out “politically correct individuals” in Biden’s government for a self-defeating “cut-off-your-nose-to-spite-your-face energy policy” that actually “empowers these autocrats who are dictators like Putin and like Iran.”

Biden administration officials have long fought to keep oil in the ground, despite gas prices rising to “the highest level in more than seven years,” according to CNBC. ABC News reported Jan. 8 that Biden promised a “$2 trillion package” to cut “planet-warming greenhouse gas emissions in half by 2030.” Fox Business host Stuart Varney explained how Biden’s weakness on energy policy encouraged the Russian invasion of Ukraine on the Feb. 24 edition of Fox & Friends.

“When we lost our energy independence, we gave Putin leverage,” Varney said. “When we withdrew from Afghanistan in chaos, we looked like we were fumbling. We looked like we were weak. You combine that original energy mistake with the withdrawal from Afghanistan and the weakness which was perceived about us, that’s why Putin’s doing what he’s doing.”

CNBC appears to have intensified its scrutiny of the economy under Biden in recent weeks. CNBC’s on-air editor Rick Santelli recently slammed the Federal Reserve for having “done nothing” to lower inflation on the Feb. 10 edition of Squawk Box. That is even more concerning since CNBC also reported Feb. 10 that inflation “eroded pay by 1.7% over the past year.” Famous opinion pollster Frank Luntz appeared on the Mar. 2 edition of Squawk Box and declared that Biden “missed the opportunity to lift people up” in his State of the Union speech.