Bloomberg News just put out a spin piece on the economy that would make professional propagandists blush. 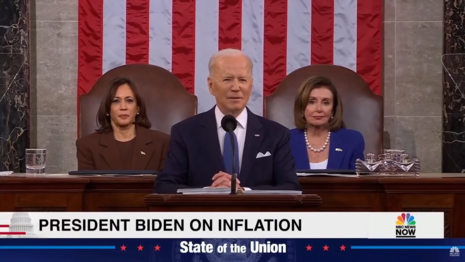 Bloomberg News put out an asinine Feb. 27 story headlined: “Inflation Pain Means Biden Gets No Credit for Roaring Economy.” The outlet hailed the “hot” job market, a “powerful jobs recovery” and an economic “rebound that’s handily outpaced that of other major developed nations.”

But here was the kicker: Bloomberg News hedged that voters were still anxious because “inflation is drowning out the broader picture of an economy returning to health.” They also claimed that the higher demand apparently driving inflation has been “fueled by a powerful jobs recovery under Biden.” The outlet cited the unemployment rate dropping to 4 percent and “[w]age increases.”

The only problems with that narrative were that inflation rose to a 40-year high and every indicator Bloomberg News cited as evidence of a strong Biden economy was also misleading. As Macro Trends Advisors founder Mitch Roschelle tweeted rebuking Bloomberg News:

Attn ⁦@business⁩ a hot (expanding) economy that is driven by #inflation is nothing to take credit for - time for the WH to admit it’s a problem and take ownership #WIN https://t.co/AkX46Hp4ZB

The “powerful jobs recovery” line was another strike for Bloomberg News’s credibility.  Even ADP Chief Economist Nela Richardson said in January that “[t]he economy — and this is an important point — hasn’t added one single job from the 2019 high watermark. Not one. All the jobs that we have seen gained are recovered jobs that were lost.”

The liberal media have made similar attempts to spin reports of GDP growth as great news for the Biden administration. The Washington Post recently championed a report from the Bureau of Economic Analysis showing a 5.7 percent increase in gross domestic product (GDP) last year. Andy Puzder, former CEO of CKE Restaurants and senior fellow at the Pepperdine University School of Public Policy, explained that government lockdowns caused GDP to decline by a “significant 3.4%, the largest drop since at least 1948. So, with the bar set at an historic low of -3.4% in 2020, GDP naturally rebounded in 2021.”

Finally, they buried a mention of “wage increases” and a “5.1% annual pace of gains, the best since before the global financial crisis,” according to the Federal Reserve Bank of Atlanta. Surprisingly, Bloomberg News gave the best rebuttal to itself right in the next sentence: “Trouble is, inflation is running even faster.”

Bloomberg News concluded by absolving the White House of responsibility on fighting inflation and instead pleaded for Americans to look to the U.S. Federal Reserve. “While Fed policy makers are set to start raising interest rates next month, their efforts are likely to take months, if not years, to bring price increases back toward their 2% target,” Bloomberg News reported.

Conservatives are under attack. Contact Bloomberg News at letters@bloomberg.net and demand it reject the absurd narrative that the economy is strong when regular Americans suffer under high inflation.