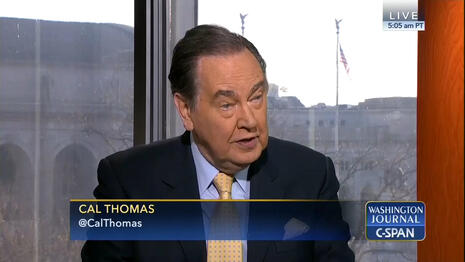 The Sun didn't make a big deal about it. Instead it chose to make the announcement with a comment in a letter to the editor. That letter was headlined “Kudos to The Sun for dropping Cal Thomas.”

The writer, Randy Barker of Baltimore, complained about a Thomas opinion piece about Kamala Harris and wrote how he was thrilled that the paper was discontinuing Thomas’ column. “I have just learned of the Sun’s decision to not publish him. With this letter, I want to make readers aware of the Sun’s principled decision.”

Sun Publisher & Editor-in-Chief Trif Alatzas did not respond to a request for comment. And why should he care? It's not like the Sun has ever cared that it has almost no conservative voices. So one less in a sea of liberal Sun opinions doesn't mean anything to them.

Thomas is a well-known conservative columnist and author. He was on Fox News for nearly two decades and has published about a dozen books. His most-recent one came out in January, 2020, and is titled “America's Expiration Date: The Fall of Empires and Superpowers . . . and the Future of the United States.”

The syndicated column he writes has been around for 37 years. His most recent column, which doesn't appear on the Sun website, focused on the “Jussie Smollet Hoax.” I guess finding out about media bias was more than the Sun readership and liberal staff could handle.

The Sun, founded in 1837, has gone from being the dominant newspaper in Maryland to a leftist shadow of its former self. I used to deliver newspapers for its Evening Sun sister publication and my first job out of college was a copy editor for its No. 1 competitor — The Baltimore News American. Both of those papers are now defunct.

Even then, the Sun was known as the liberal newspaper. Now, its once-popular sports section is overshadowed by sports coverage from the local teams. Staff cuts have marked the last several years at the paper. The Sun, along with the rest of Tribune publishing, was purchased in May by Alden Global Capital.

Alden is reviled in the news industry. It is known as ”a hedge fund with a reputation for slashing costs and cutting newsroom jobs,” according to The New York Times. Otherwise known as free market reality.

A smaller staff hasn't changed a basic reality about the Sun. It remains a wildly liberal paper and now has given readers one more example of just how liberal.