Even though the U.S. economy grew at a 2.9 percent pace in the final quarter of 2017, some in the liberal press have already begun to anticipate a recession — at the worst, possible time for President Donald Trump.

“Here’s another reason to circle the 2020 election year on the calendar. It may well be the year of the next U.S. recession,” wrote reporter Rich Miller. He turned to economists who warned “watch out” for a recession in a couple years.

“Hefty tax cuts, stepped-up government spending and robust global growth should help insulate the economy against a downturn over the next two years,” Miller claimed. Then “watch out,” because, “Fading fiscal stimulus, higher and rising interest rates, and cresting world demand could leave the economy vulnerable to a contraction — just in time for the presidential campaign.”

In spite of the expert who told him forecasting a 2020 recession was “a mug’s game” and his own admission that “they don’t have a great track record predicting downturns,” Miller sought out experts concerned about a possible recession in addition to Bloomberg Economics economists who predicted “the economy is poised for a bumpy ride in 2020.” 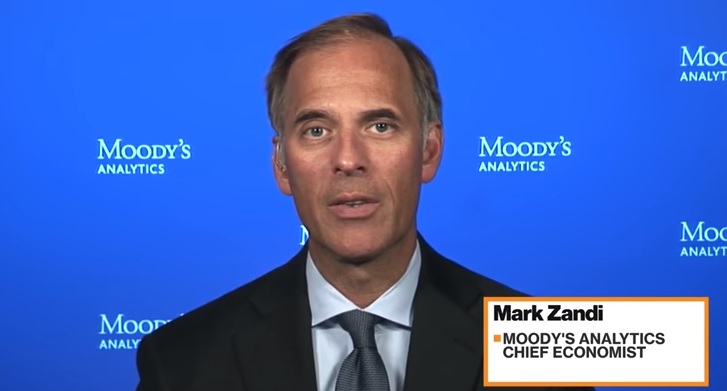 One of them, Mark Zandi of Moody’s Analytics called 2020 “a real inflection point,” and said, “It’s going to take some real good policy making and some luck to avoid a recession in 2020.”

The article failed to inform its readers that Zandi previously advised the Obama administration and donated to Hillary Clinton. The Street reported that in 2016, Zandi said Clinton’s policies would “result in a somewhat stronger U.S. economy,” but a Moody’s analysis of Trump’s policies anticipated less growth and jobs than for Clinton.

Bloomberg’s Miller even warned that a recession could actually happen sooner writing, “That doesn’t preclude some sort of geopolitical shock or policy misstep ending the 105-month-old expansion before then, of course.”

He then cited Trump’s recent “ratcheting-up of trade tensions” but admitted, “Economists don’t see the latest actions leading to a recession.”