When Warren Buffett promised to make his tax returns public if Donald Trump did the same, the media loved it. But they refused to cover one key thing Buffett’s tax returns would reveal about the Midwest billionaire -- his support for abortion. 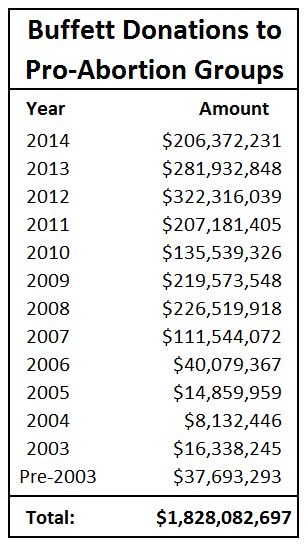 While ABC, CBS, and NBC all covered Buffett’s endorsement speech for Clinton on August 1, they skipped the more than $1.8 billion Buffett has given to fund abortion.

Instead of reporting that Buffett has given enough money to abort more than 3.6 million children (or almost the entire population of Los Angeles), the networks promoted Buffett’s “challenge to Trump.”

The Susan Thompson Buffett Foundation has been funding abortion since at least 1989. Between then and 2014, at least $1,828,082,697 went to pro-abortion groups, courtesy of Buffett.

During Hillary Clinton’s 2008 failed presidential campaign, she claimed abortion should be “safe, legal, and rare.” But Buffett’s abortion spending shows he values everything but rare abortion (Clinton has since changed that stance, and Planned Parenthood endorsed her in January 2016).

All the networks skipped the significance of the nation’s No. 1 abortion funder endorsing Clinton. They also ignored other tell-tale signs of Buffett’s liberal allegiance, and merely called him a “fellow billionaire.”