“America’s Doctor” has made a bad impression on 10 American doctors, and in response they have put his claims under the knife. TV’s Dr. Mehmet Oz isn’t happy about it.

On April 16, 10 doctors wrote a joint letter to Columbia University’s Dean of Medicine, asking that Dr. Oz be removed from his position as the Vice Chair for the Department of Surgery. Oz is the host of the nationally syndicated Dr. Oz Show and is often cited as a medical/health expert by the media.

In their letter to Columbia University, the doctors complained about two separate issues: Oz’s opposition to genetically modified foods (GMOs) and his endorsements of questionable products on his program. They wrote, “he has manifested an egregious lack of integrity by promoting quack treatments and cures in the interest of personal financial gain,” and that,  “members of the public are being misled and endangered, which makes Oz's presence on the faculty of a prestigious medical institution unacceptable.”

This isn’t the first time Oz’s credibility has been called into question. Over the last five years, he has been criticized by numerous sources including the National Fisheries Institute and the FDA. He was also reprimanded by Sen. Claire McCaskill, D-Mo., in a Senate hearing in June,  2014.

Despite the evidence against Oz, he still appears in some news outlets and is closely tied to media maven Oprah Winfrey. His April 22 response to the most recent complaints appeared on ABC, CBS, and NBC. He also vowed to respond to the letter in his April 23 show, according to The Washington Post.

Oz painted the controversy as an attack on his free speech rights. “No matter our disagreements, freedom of speech is the most fundamental right we have as Americans. And these ten doctors are trying to silence that right. So I vow to you right here and right now, we will not be silenced, we will not give in,” Oz proclaimed.

All three broadcast networks covered Oz’s rebuttals and portrayed the letter -- including Oz’s forthcoming response -- as an argument over labeling genetically modified food. All three focused on how he was planning to defend himself against his “critics.” They didn’t consider that the doctors’ complaints might be legitimate.

ABC’s Ryan Smith helped make the case for the defense. “Dr Oz’s response is set to air in Thursday's show that his spokesman says will be dedicated to rebutting the critics and fighting for the right to know what’s in your food.” NBC News correspondent Stephanie Gosk emphasized, “on this issue, Dr Oz is showing no signs of backing down.”

The controversy around Oz has been bubbling up particularly since last year, yet Oz still has a major impact. He has a daily TV show with more than 9 million viewers per week, a column on Oprah’s website, and in just the last four months has been featured as a medical expert on both Today and The View.

While each broadcast report on the Columbia letter made some reference to previous questions of Oz’s credibility, the networks largely ignored the letter’s charges of “quack cures.” Instead, reporters focused on discrediting the 10 doctors and their letter because the doctors were not opposed to the GMO industry.

CBS This Morning has addressed the letter three times so far, referencing Oz’s clash with the FDA and the previous Senate hearing on his “endorsements of diet fads.” CBS also questioned the intentions of one of the authors of the letter -- Dr. Henry I. Miller, M.D. of the Hoover Foundation -- because he is a proponent of GMOs. Dr. Daniel Amen, a frequent guest  on The Dr. Oz Show, naturally defended Oz. “To say that someone should be fired because they are saying what they believe on television I think is just ridiculous,” he said. 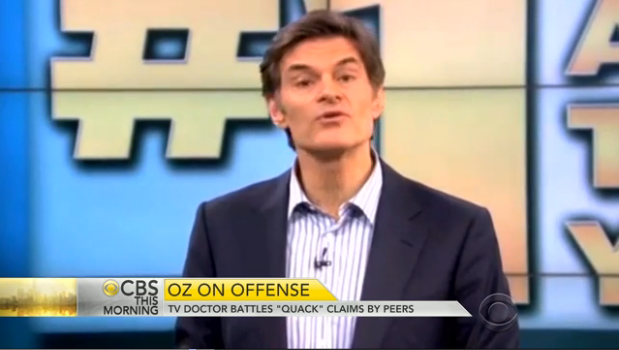 Good Morning America also addressed the letter, spinning its story starkly in Oz’s defense. The show described Oz as being a long-time supporter of “alternative medicine.” It added that he was being attacked by the doctors because of his stance on labeling genetically modified foods.

ABC Anchor George Stephanopoulos said there were, “new questions about the accusers and their agenda.” He emphasized that Dr. Henry Miller had previously been convicted of Medicaid fraud. Lisa Graves, of the “liberal watchdog” Source Watch, argued that the 10 doctors were attacking Oz because they are biased against labeling GMOs.

Oz controversies go back at least five years. In January 2010, the National Fisheries Institute (NFI) called Oz out on misleading claims he had made concerning mercury levels in seafood. The following year,  the Food and Drug Administration issued a series of letters rebutting claims that Oz had made about arsenic levels in certain brands of apple juice. Don L. Zink, Ph.D, the Senior Science Advisor, stated: “it would be irresponsible and misleading for The Dr. Oz Show to suggest that apple juice is unsafe based on tests for total arsenic.”

The United State Senate even demanded answers from Oz on June 17, 2014. They wanted to know about unsubstantiated claims he had made about three different “miracle” weight loss supplements.

Then in a December 2014 study, 14 Canadian doctors investigated the accuracy and reliability of recommendations made on two medical TV programs one of them being Oz’s show. According to the Los Angeles Times, ”only 21% of the recommendations on ‘The Dr. Oz Show’ could be supported by what the researchers considered ‘believable’ evidence. Another 11% were supported by “somewhat believable” evidence.”

Methodology: News mentions of Dr. Mehmet Oz were found by searching the transcripts of NBC, CBS and ABC between June 1, 2014 and April 22, 2015.