FLASHBACK: Networks Worried About Release of Personal Information When It Hurt Obama 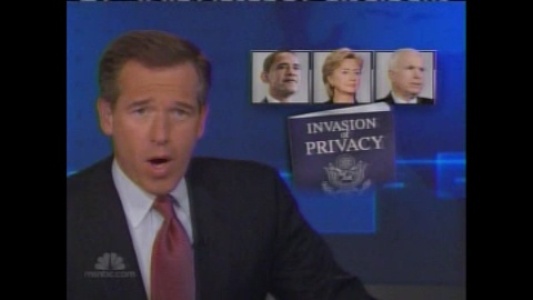 While Big Three (ABC, CBS, NBC) network reporters and anchors were quick to pounce on Donald Trump’s private tax returns being released, they didn’t seem to express the same concern when candidate Barack Obama was having his personal information looked into.

Back in 2008 when it was revealed that Obama’s personal passport information was being examined by Bush administration State Department officials the terms “skullduggery,” “political dirty tricks” and “bombshell” were being thrown around.

MATT LAUER: Let’s begin, though, this morning with the firestorm of controversy after these three State Department employees were caught spying at Barack Obama’s passport files. NBC’s Andrea Mitchell has the latest overnight developments on this story. Andrea, what is the latest?

ANDREA MITCHELL: Well, there is so much going on, Matt. Good morning. Today, top State Department officials are meeting with department lawyers before reporting to Barack Obama’s Senate office. But so far they have no explanation for three separate unauthorized breaches into the senator’s passport file by contract employees.
...
Two contract employees were fired, one was disciplined. But although department spokesman Sean McCormack said that the violations were merely the result of imprudent curiosity, not political dirty tricks, under questioning, officials admitted they had not yet even begun to investigate the motives or the timing of the breaches.
...
A person’s passport files can include a treasure trove of personal information, and passing that information on can be a criminal offense. In the 1992 campaign, the first Bush administration was accused of illegally accessing candidate Bill Clinton’s passport files and that led to a three-year special counsel’s investigation. No one was ever charged. Thursday night, Obama spokesman Bill Burton called the violations an outrageous breach of security and privacy.

Later on that evening’s NBC Nightly News the story expanded to include that John McCain and Hillary Clinton’s information had been looked into as well, but the focus remained on how Obama was hurt:

BRIAN WILLIAMS: It was quite a bombshell when the news broke late last evening. Someone working for the US State Department had taken a look inside Barack Obama’s personal passport file. And it happened not once, it turns out, but three separate times. Obama issued a statement expressing outrage. The State Department promised to get to the bottom of it. And in getting to the bottom of it, they found more. Someone had taken a peek at Hillary Clinton’s file and John McCain’s. It’s another swerve in this wild campaign.

Over on the March 21 edition of ABC’s World News, anchor Charlie Gibson announced: “It could be a major breach in security. It could be a simple matter of snooping. The secretary of state called all three presidential candidates today to tell them their passport files had been improperly accessed by State Department contract employees. In the case of Barack Obama, his file had been accessed without permission three times in just the past few months. An investigation is under way, to determine if political dirty tricks might be involved.” His colleague Jonathan Karl, on the March 22 Good Morning America, wondered: “The question now is, was this a case of political dirty tricks or simply incompetence?”

And Katie Couric, on the March 21 CBS Evening News, introduced the passport story this way: “Was it political skullduggery or maybe just bureaucrats with time on their hands? We don’t know the reason yet; but in a breach of security, people working for the State Department got into the passport files of all three presidential candidates: Barack Obama, Hillary Clinton and John McCain. Whatever the motive, it raises questions about how well the government is guarding the personal information it has on all of us.”

Fast forward to today and the network anchors and correspondents seemed more concerned with how the release of Trump’s tax returns will hurt him politically and less on the ramifications of guarding personal information.