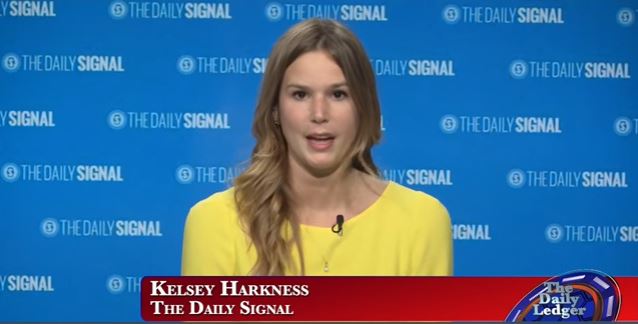 In an excellent piece on Monday for The Federalist, Daily Signal senior news producer Kelsey Harkness thoroughly detailed her time at the 2016 Investigative Reporters and Editors Conference (IRE) that led her to conclude that “the problem” in the journalism profession today “goes far beyond agreeing on the facts” after seeing media bias in panels about guns and women’s health.

Harkness began by emphasizing that she went to the conference with the intention “to learn about fairness, integrity, and hard work” and on issues like “gun rights, women’s health, and policing,” she expected there to be “equal weight” given to all sides.

After making clear that she works for a site affiliated with the conservative Heritage Foundation, she realized that “during some training sessions I watched top professionals in their fields encouraging political bias against conservatives before reporters’ pens could even hit paper.”

Going to the first panel that she determined should be “called out,” it centered on women’s health and was entitled “The ‘War on Women’s Health”’” and featured two current writers for the far-left Mother Jones (including the moderator), a former Mother Jones writer now with The Guardian, and another from ProPublica.

If that doesn’t give the reader a sufficient peek into how the panel went about suggesting journalists should cover this issue, here was the panel’s synopsis:

In the first quarter of 2016, state lawmakers introduced more than 1,000 restrictions on sexual and reproductive health—more than 400 related to abortion alone. This election season, this conflict will rage on and will touch millions of lives. That’s why this realm is ripe for investigative reporting. A panel of reporters and editors who cover this beat will offer advice on how to dig deeper on reproductive rights. They’ll discuss intersections with other beats, the unique challenges of interviewing sources on either side of a stark ideological divide, and best practices for researching the major players involved—the donors, lobbyists, scientists, and politicians.

Harkness immediately went to work ripping the panel’s title as having “no basis in fact” because it “assumes lawmakers deliberately want to harm women, which is an extremely bad-faith assumption” in addition to selecting only “outlets such as Mother Jones who unabashedly support this premise.”

“But in assembling this panel, IRE sends the message that only one political view of women’s health care matters. Only one side of women’s health care is worth investigating. In a country where only 29 percent of Americans believe abortion should be legal under any circumstances, that message seems a bit unfair,” she added.

Citing the Kermit Gosnell case, Harkness astutely noted that “[t]he media greatly failed in their duty to investigate or even report on this case” and proved to her how significantly the industry “missed such an atrocity.”

Turning to a panel on guns, their premise seemed all well and good, but the story was the same as the other example upon peeking at who participated with individuals from Forbes, Huffington Post, the Law Center to Prevent Gun Violence, and The Times-Picayune. Naturally, Huffington Post writer Ben Hallman previously worked at a site funded by the pro-gun control group Everytown for Gun Safety Support Fund.

Harkness even opined that gun rights groups like the National Rifle Association (NRA) deserve to be challenged, but “one might think that you’d find a staunch Second Amendment supporter sitting next to Hallman.” She then went on to poke holes in the liberal media’s narrative about gun control:

If an organization preaching good journalism decides to invite an advocate who represents the liberal side to the gun-control debate, it should go without saying that they should invite someone from the other side. Perhaps that’s why, when watching your TV at night, it’s so easy to conclude that the majority of Americans support more gun control.

Doing her due diligence, she reached out to IRE executive director Mark Horvit for comment on why there was such a skew to the left in some of the conference’s panels that sought to give journalists advice on how to cover certain issues.

Horvit responded that “[w]e sometimes add experts to sessions if they’ve done research on a topic or have information that can help the session” and described a scenario in which “we had a former police chief on a panel about policing, and we’ve had judges and elected officials speak on sessions.”

As for the women’s health panel, Horvit told Harkness that while the panel’s name was “proactive,” he revealed “that is not an excuse” for there to be a prevalence of bias. In her conclusion, Harkness commented on her experience of hearing Washington Post executive editor Marty Baron speak at the closing of the conference:

As he was on stage, Baron expressed frustration about the current state of journalism, where the public now gets its news from politically charged outlets that each has its own set of facts. We can’t even agree on the facts anymore, Baron lamented.

After attending this conference, I gathered the problem goes far beyond agreeing on the facts.